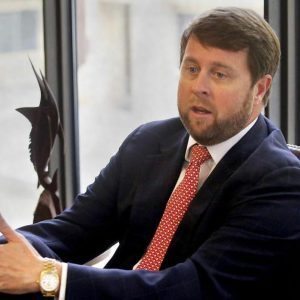 Governor Henry McMaster on Wednesday was joined by members of the General Assembly to announce that he has nominated former U.S. Attorney and former chairman of the S.C. House Judiciary Committee, Peter M. McCoy, Jr., to serve as the next chairman of Santee Cooper’s Board of Directors.

“It is my honor to nominate Peter McCoy to serve as chairman of Santee Cooper’s Board of Directors,” said Gov. Henry McMaster. “I am confident that he is the right man to protect our state’s ratepayers and taxpayers, to bring much-needed transparency and accountability to the Board of Directors, and to lead Santee Cooper fairly and honestly while the General Assembly determines its fate.”

Currently a Charleston-area attorney, McCoy was chosen by President Donald J. Trump to serve as the U.S. Attorney for the District of South Carolina in 2020.

Prior to serving as U.S. Attorney, McCoy was elected in 2010 to serve in the South Carolina House of Representatives, representing the people of District 115 in Charleston County. In late 2018, McCoy was elected by his peers to serve as chairman of the S.C. House of Representatives’ Judiciary Committee. In the aftermath of the VC Summer project being terminated, S.C. House Speaker Jay Lucas tapped McCoy to serve as chairman of the S.C. House Utility Ratepayer Protection Committee.  From 2005-2010, McCoy served as a prosecutor in the Ninth Circuit Solicitor’s Office.

“There are good choices, there are better choices and at times there is the absolute best choice, and that choice is Peter McCoy,” said S.C. Speaker of the House Jay Lucas. “I know firsthand from working with him that he is a strong advocate of transparency and he is exactly the type of individual that can bring the cultural shift that Santee Cooper needs. There is no better man for this job.”

McCoy is a graduate of Hampden-Sydney University and the Regent University School of Law.

McCoy, 42, is a resident of Charleston County and is married with three children.