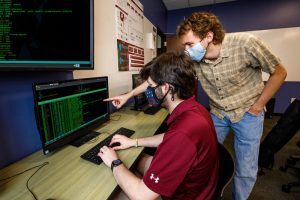 Some College of Charleston students are going to the national championship this weekend.

Eight members of the College’s Cybersecurity Club will compete against teams from nine other colleges and universities in the National Collegiate Cyber Defense (CCDC) Competition beginning on April 23, 2021. It is the largest college-level cyber defense competition in the United States.

The CofC team received an automatic bid to the national competition after beating 23 other schools to win the Southeast CCDC last month. This is the first time that the College’s Cybersecurity Club has made it to the finals.

Team captain Patrick McCabe, a senior majoring in computer science, says the competition will force teams to not only have to defend against cyberattacks, but also to compete in completing various business tasks during the competition.

During the competition, a group of industry professionals from government agencies as well as private companies will join forces as the red team to break into computer networks to exploit information from a mock organization. Teams of students must try to prevent that information theft from occurring, while also conducting regular business functions.

“The team has to be ready to learn on the fly,” says the junior computer science major. “During the competition, you can be prepared for A through Z, but sometimes something else is going to happen. You have to be prepared to learn as you go, figure out what’s going on and then figure out how to fix it.”

Computer science professor Jonathan Sun, who coaches the Cybersecurity Club, says he is proud of what the team has done so far this year.

“This team is completely self-motivated and self-trained,” says Sun. “All team members are so passionate about cyber defense technologies.”

This past weekend, the CofC team was able to continue their success by placing second in the state-wide Palmetto Cyber Defense Competition.

Sebastian van Delden, dean School of Sciences and Mathematics, says the club’s success this year has helped to raise the profile of the College.

“These performances help us recruit the next cohort of students,” he says. “A lot of people in South Carolina or the Southeast don’t know that we have one of the largest computing departments in the state. When our students go head-to-head against the larger research-oriented universities and win, it certainly helps tell our story of commitment to undergraduate education and our students.”

Follow us
Related Topics:CofC Cybersecurity Clubcollege of charleston
Up Next