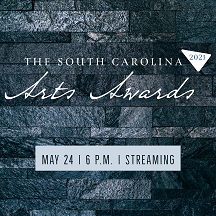 The South Carolina Arts Awards will honor South Carolinians for their exceptional achievements in, support of, or advocacy for the arts during a professionally produced online streaming presentation planned for Monday, May 24th, 2020 at 6 pm.

Surprise guests will join to help introduce each recipient. Mini-films by South Carolina filmmakers Drew Baron, Lynn Cornfoot, Abe Duenas, Patrick Hayes, Roni Henderson, Lee Ann Kornegay, and Ebony Wilson will debut, telling each recipient’s story. The filmmakers worked under the direction of producer Betsy Newman. Location shooting for the ceremony and production of the stream are being provided by Midlands-based iSite Multimedia and Fisher Films.

The Governor’s Award recipients were announced in February. The recipients are:

The Folk Heritage Award recipients were also announced in February. Being honored are: