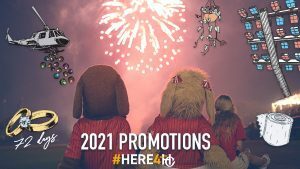 During the unexpected 19-month gap between professional baseball games at The Joe, the Charleston RiverDogs have made it a mission to be “Here for the Holy City.” The newly released 2021 promotional calendar maintains that focus on community, while bringing back the fun that the Holy City expects at The Joe, starting right off the bat with Opening Night on May 4th. Though the ballpark will open with limited capacity, the entertainment will continue.

“The announcement of our slate of promotions for 2021 is another indicator that we are returning to normal here at The Joe,” said RiverDogs President and General Manager Dave Echols. “Friday night fireworks and Thirsty Thursdays aren’t going anywhere and I am excited to honor teachers, frontline medical workers, and military members all season. While we are limited in some aspects this season, we didn’t place a limit on our creativity while planning this schedule. From a Rays welcome party to a night celebrating toilet paper, we have plenty of fun planned for our guests.”

Boeing Red Shirt Fridays with Post-Game Fireworks
There are 10 fireworks shows scheduled in 2021. Every Friday night, fans can enjoy a fireworks show set to an assortment of musical themes. In addition, the RiverDogs will shine a spotlight on active duty and retired military members and their families while the team wears their red alternate jerseys on the field.

Budweiser Thirsty Thursdays
A RiverDogs staple continues in a socially-distant fashion with $1 beers available throughout the ballpark all night long.

MUSC Health Family Sundays
Before, during, and after each Sunday home game the Dogs will make it all about the children! From the video board to between inning contests and even the opportunity for MUSC Children’s Health Kids Club members to run the bases, Sundays are memorable for the entire family.

Saturdays Live at The Joe
When you come to a RiverDogs game on a Saturday night you can expect something special after the game. Following every Saturday contest at The Joe there will be either a helicopter ball drop (for cash prizes!) or an LED light show utilizing the ballpark’s new state-of-the-art lights.

Tuesdays  – Dog Day
The tradition of bringing your four-legged friend to the game has moved to a new night in 2021. With no games on Monday this season, the RiverDogs invite you to bring your pup to The Joe for each Tuesday home game

Wicked Wednesday presented by Wicked Weed
If beer is your thing, look no farther than Wednesdays, where Charleston celebrates craft beers and throw in some wicked ballpark fun

Rays Welcome Party – May 8th
The first Saturday game of the season will feature a celebration to show the Tampa Bay Rays how thrilled the RiverDogs are to be part of the top-ranked farm system in baseball. The first 1,500 fans into the stadium will receive a Tyler Glasnow bobblehead.  In addition, the first 50 fans who turn in their Yankees gear will walk away with a brand new Rays/RiverDogs t-shirt.

Toilet Paper Night – June 26th
You may notice that Charleston has this night slotted #2 in the pecking order. Remember last year when toilet paper was a precious commodity? The RiverDogs would like to help wipe those memories away. The first 1,000 fans through the gates will be gifted their very own roll of bathroom tissue. After the game, fans are invited to TP the ballpark

Plant Propagation Party – May 23rd
This idea stems from the team’s deep-rooted desire to let their fans leave a game with something living and breathing. Charleston thought about dogs, cats, frogs and other creatures, but couldn’t make it work.  The solution: they’ll give you a pot, soil, and a houseplant clipping and you do the rest.  A green-thumb is not a requirement, just water it and watch the growth begin.

Viral Trends – May 29th
Wasssuuuppp! Help the RiverDogs travel through the decades with viral trends from every era to celebrate the 25th anniversary of the macarena.  From Gangnam Style to Grumpy Cat and Left Shark to flossing, it will all be covered on this night.

Kim and Kris Anniversary Celebration – June 10th
Ten years ago, Kim Kardashian and Kris Humphries united in holy matrimony.  Their eternal commitment to one another lasted an impressive 72 days.  On this evening, Charleston will celebrate several things that surprisingly lasted longer than Kim and Kris’s marital bliss.

Spotlighting those who are “Here for the Holy City”

At all 60 home games in 2021, the RiverDogs will continue the “Here for the Holy City” message by inviting and recognizing members of the community from three distinct groups.

1.The Boeing Military Family of the Game will enjoy VIP treatment in the Segra Club at Riley Park and special VIP treatment, thanks to Boeing. Nominations and applications can be made at riverdogs.com/military.

2. The Harris Teeter Educator of the Game will present an opportunity to recognize an outstanding teacher to be recognized at each game and to receive a Harris Teeter gift card. Nominations can be made at riverdogs.com/educators.

3. The MUSC Healthcare Hero of the Game will honor a medical front-line worker who has made an impact over the last year. The selected individual will enjoy the game from the unique view of the Ashley Furniture “Best Seats in the House” and will receive a gift card from Panera Bread.

A Dog by Any Other Name

No one beats the RiverDogs, but even a dog likes to change his spots every once in a while. Don’t miss these dates that feature special on-field jerseys and plenty of fun for everyone in attendance:

Perros Santos – May 5, May 22-23, August 21-22
The RiverDogs will once again celebrate Charleston’s growing Hispanic population by taking the field as Los Perros Santos de Charleston for five games throughout the 2021 campaign. The team will celebrate the local Latin American culture with music, Spanish-speaking public address announcers, food specials and much more.

Charleston Boiled Peanuts – May 19, June 26, July 27, September 9
Once again, the team will suit up to honor the preferred salty snack of the Lowcountry—the boiled peanut.

Negro League Jerseys – June 12-1
The RiverDogs and their opponent, the Columbia Fireflies, will wear Negro League jerseys on Larry Doby Heritage Weekend. Doby, a South Carolina native, was the first African-American player to play in the American League.  The RiverDogs will suit up as the Newark Eagles, while Columbia will sport the uniforms of the Homestead Grays.

Holy City Jerseys – May 9, May 30, August 1, September 12
The RiverDogs will pay homage to Charleston’s nickname as “The Holy City” by wearing special uniforms on four Sundays throughout the campaign.  The team will sport jerseys and caps featuring an interlocking “HC” logo with a halo above the “H”.

All RiverDogs tickets for the 2021 season are available for purchase online and will be delivered digitally. Once purchased, tickets can be printed at home or scanned on a phone. For answers to frequently asked questions, fans are encouraged to visit the RiverDogs Digital Ticket Guide. In addition to tickets, the entire RiverDogs gameday experience will be cashless including parking, the team store and concessions. Fans who do not have credit or debit cards will be able to use cash to purchase gift cards at Fan Services on gamedays.

The full 2021 promotions schedule can be viewed here. RiverDogs season tickets, flexible ticket plans, group tickets and single-game tickets, including options to the Segra Club at Riley Park, are now available for the 2021 campaign at riverdogs.com/tickets or by contacting the RiverDogs front office at 843-577-3647 (DOGS). The RiverDogs begin the season on May 4 when they host the Myrtle Beach Pelicans at The Joe. A full schedule for the 2021 season is available at riverdogs.com.