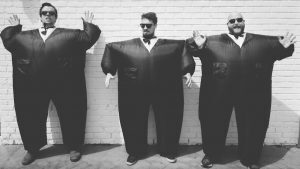 Starting in March of this year, Maari Suorsa and Henry Riggs of Nameless Numberhead started producing weekly independent comedy shows and classes in partnership with South of Broadway Theatre in Park Circle. Based on the overwhelming interest and support from the community, they are continuing their partnership further into 2021 by announcing new shows and classes starting in May.

Their first session of limited capacity classes completely sold out and their weekly performances by the improv team “Super Grouper” are also consistently selling out at limited capacity.

As vaccinations increase, they hope to expand their operation by fall of 2021 by producing a variety of improv, sketch comedy, and stand up shows consistently in Park Circle. But for now, they are keeping a limited capacity of in-person shows and classes while also launching a new umbrella organization for all the artists in residence they’ll be hosting, called the ‘Rip Comedy Collective’.  The name comes from their long running variety platform Rip City CHS, which recently turned into a live stream show during the pandemic called DigiRip. It will return to being a live performance this month for DigiRip Live on April 30th. Tickets are available now.

Now, Rip Comedy Collective will produce shows like their current weekly improv show Super Grouper, and the upcoming weekly improv show CHAMPS, every Thursday night at 8 pm starting May 6th.  very week will be a completely different improv comedy show based on audience suggestions. The night will feature veteran improv group CHAMPS which is composed of Andy Livengood (Butcher Stories), Matthew Perry (Yan Film Group), and Henry Riggs (Nameless Numberhead). Each week will host a different opening improv group, in addition to a set from CHAMPS plus a second act featuring the 2 groups combining for a finale improv jam. Keep an eye out for more show announcements at numberheadcomedy.com.

In addition to shows, the collective is also continuing to offer classes in improvisation and comedy writing. The next session begins on May 9th with an Intro to Improvisation taught by Joshua Christian, from comedy duo Mystery Meat. Intro to Improvisation is not only a great start for someone interested in learning improvisation, but also to help anyone with listening skills, agreement, public speaking, being in the moment, and working together to build ideas.

Starting on May 10th will be Sketch Comedy Writing with Henry Riggs of Nameless Numberhead. Sketch comedy writing will help you develop ideas into short comedic pieces for stage or screen as well as help you meet deadlines for writing. Then starting May 18th will be Creating Characters for Improvisation with Maari Suorsa of Nameless Numberhead. This intermediate course will teach the concept of playing characters onstage using emotional points of view, energy, and physicality to vary your playing styles on stage. At least one level of improv experience is suggested for taking this class. Each course will run for 6 weeks with a student showcase at the end of the class. Classes are $135.

Mex 1 Park West to Host Comedy Night on May 18th