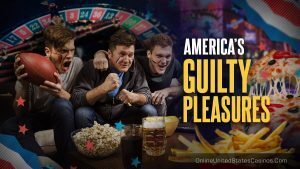 What is a guilty pleasure exactly? The term often gets defined as the enjoyment of something that is generally not held in high regard. According to many psychologists, American society should do away with this phrase, as activities associated with this term provide mental breaks that can improve our ability to engage more positively with others and deal with stressors better. A source of happiness is nothing to get embarrassed about, as it does not negatively impact us in any way other than how others may perceive us.

In the summer of 2018, the Fandango Media-owned streaming service VUDU ran a nationwide poll to determine America’s guilty pleasures. It included over 2,000 participants from multiple states, yielding results that stated that 84% of Americans have at least one delight that they indulge in from time to time, which they are not over the moon about. Below, we look at a few activities that many American’s cannot resist.

Playing online gambling games is not a new activity. It has been around since the mid-1990s when the island nation of Antigua and Barbuda decided to offer internet gaming licenses to company’s interested in providing this service. Once that happened, the sector instantly took off, as the number of platforms grew from fifteen in 1996 to two hundred in 1997. Today, it generates annual revenues of over $60 billion.

Slots are this industry’s cash cows pulling in the lion’s share of the profits. The US regulation regarding this activity differs from state to state. However, American players have been playing at offshore sites that accept them for decades. These platforms get overseen by credible international organizations such as the MGA that guarantee fairness.

Fast food is passé, right? Well, no. A 2018 study from the National Center for Health Statistics showed that almost 37% of adults eat fast food every day. People between the ages of 20 and 39 most indulged in this activity, as 44.9% from this group consume what most nutritionists popularly call junk food daily. People over 60-years-old were the least likely to eat burgers, pizza, and burritos. What is interesting is that the referenced study claims that fast-food consumption increases parallel to family income. It was also most consumed for lunch and the least for breakfast.

According to QSR Magazine, McDonald’s is still by far the fast-food king of America, with system-wide sales of over 38,524 million. Starbucks is in second place with almost half that, and Subway is in third. The reason behind our obsession with this unhealthy habit is convenience. 32% of surveyed people said they do so because it is cheap.

Many casual viewers are not aware, but Dutch television is to blame for the global reality TV boom of the early 2000s. Their Big Brother show took the world by storm, transporting itself state-side in 2001, two years after it first aired in the Netherlands. In reality, the concept has been around since the 1940s, and Allen Funt’s hidden camera show – Candid Camera. However, in the 2000s, this genre exploded, and it was the most popular thing on television, with American Idol generating weekly audiences of over 30 million people.

Now, two decades after the boom started, reality TV is nowhere near as dominant as it once was, but it is still hanging around. Too Hot to Handle, The Circle, and Keeping Up With the Kardashians are still pulling in decent numbers. Americans claim that reality TV gives them an escape, and they enjoy the drama featured in these series.

Everyone has heard of the English idiom keeping up with the Joneses. It refers to comparing yourself to your neighbors as a benchmark for social success. Sadly, most people do it, and going by VUDU’s poll, 15% of those admitting to having a guilty pleasure also said that they stalk other people’s social media. In reality, this percentage is likely significantly higher if everyone had answered the survey truthfully.

Social networks are a tool, like anything else. However, keeping tabs on friends and acquaintances leads many people to feel miserable about themselves. Psychologists believe that these platforms enable and encourage this behavior, praying on people’s insecurities and impulses. Around 91% of young people use social media platforms, and 38% of heavy users show signs of depression. Thus, it is best for young people, in particular, to avoid monitoring how their friends are doing in life.

Other American guilty pleasures are eating ice cream, falling asleep in front of the TV, procrastinating chores, listening to cheesy music, and so on. None of these or the activities listed above are anything to be ashamed of if done in moderation. If they do not inhibit your productivity or well-being, there is nothing to feel guilty about enjoying them.

Shelly Schiff has been working in the gambling industry since 2009, mainly on the digital side of things, employed by OnlineUnitedStatesCasinos.com. However, over her eleven-year career, Shelly has provided content for many other top interactive gaming websites. She knows all there is to know about slots and has in-depth knowledge of the most popular table games. Her golden retriever Garry occupies most of her leisure time. Though, when she can, she loves reading Jim Thompson-like crime novels.