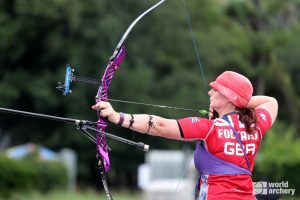 This article is dedicated to the success of British archery athletes in the international arena. All statistics are given according to the World Archery Federation (WA) rankings and relevant at the time of publication of the article.

Folkard won prizes in many tournaments, here are some of her best results:

– at the 2019 European Games, which was held in Minsk, Belarus, Naomi won two medals: gold in the women’s team event and silver in the mixed team competition.

Hazel is an experienced archer, and the recurve bow is her strong side. She is 6th in the ranking of the best archers (Para-Archery) since 2020.

This high result was facilitated by winning prizes in the following tournaments:

David is among the twenty best para-archers in the world and ranks 11th in the WA rank. David’s best results:

The eighteen-year-old Layla has not won any major adult tournaments yet but has been in the top ten archers at some of these tournaments several times. These results allowed her to get into the top 50 of the best compound bow archers. Layla has 45th place in the World Archery ranking. She is one of the best Britain’s female compound archery.

Jessica is one of the strongest para-archers in the world. She takes 3rd place in the WA ranking.

Here are some of Jessica’s best results:

At the moment, Jodie is ranked 5th, and in 2019 she was the third strongest para-archer in the world.

At international competitions, he often entered the top 10:

Several years ago, Adam was among the 20 strongest archers in the world, at the moment he is ranked 46th in the WA rankings. One of his best results on the international stage was bronze in the Copenhagen 2015 World Archery Championships, Denmark.

Among compound bow male para-archers, Nathan is ranked 4th in the world. There are gold, silver, and bronze medals in his collection:

In 2015, John was the world’s best para-archer according to the World Archery rating. At 55 years old, John is one of the most mature British archers. Although he is currently ranked 16th in the world rankings, his victories will always inspire athletes. One of these legendary victories is gold at the Paralympic Games, 2008, Beijing, People’s Republic of China.

Peaceful sports archery unites people all over the world, and it can be practiced by people of almost any age. And in order to start practicing, a beginner, like an athlete, will need archery gear: recurve or compound bow, arrows, arrow quiver, archery breast guards, forearm protectors, possibly other archery accessories, and target for shooting.

In conclusion, let’s wish all archers hitting the bull’s eye.