Nearly 50 artists took part in an initial “play-in” round. A sample of play-in winners music submissions are below:

The playoff bracket is now set with 32 artists who will compete through votes in the form of donations. One vote is $1.00 and fans can make as big of a vote (donation) as they want for their favorite performer to advance in the competition.

Future competition rounds and voting will be on the Sing United Facebook page.

More than $11,000 in overall prizes – grand prize winner will receive

Additional prizes will be available for the top four finishers 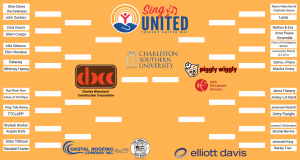