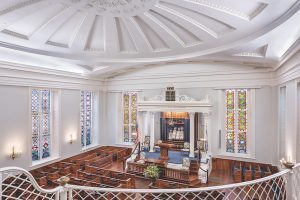 In celebration of National Preservation Month, the Preservation Society of Charleston (PSC) will host a series of in-person and virtual events to educate and raise awareness about the importance of historic preservation in Charleston. The tours and events (listed below) will be led by local architects, historians, preservationists, and authors. Events begin as early as April 29th, and are scheduled throughout the entire month of May.

With this year’s lineup of Preservation Month events, the PSC hopes to spark interest in the city’s rich and storied past, shine a light on the pressing issues threatening Charleston, and showcase the remarkable preservation projects taking place in and around the city. Best of all, Preservation Month events provide a wonderful opportunity to connect with community partners, neighbors, and local businesses.

9 Limehouse Hard Hat Tour + Reception | April 29th at 5 pm – Join the Preservation Society and leading historic preservation architect, Glenn Keyes, to examine this grand Charleston single house in the midst of a comprehensive exterior and interior rehabilitation. The tour will be followed by light refreshments and the opportunity for further discussion. Tickets: bit.ly/9LimehouseStreet

5 East Battery Virtual Tour Release | May 2nd – Join PSC Executive Director Kristopher King as he leads viewers through the history and restoration of one of the most prominent homes on High Battery. Historically known as the John Ravenel House, it was constructed between 1847 and 1849 on reclaimed marshland sold by the city in 1838. Originally built in the Greek Revival style, it was transformed to the Italianate style after the 1886 earthquake. Learn more about this multi-year restoration project undertaken Richards Marks Restoration and Glenn Keyes Architects and the steps they took to mitigate flooding in one of Charleston most flood prone neighborhoods. Rent video: bit.ly/pscvirtualtours

Historic Morris Street Walking Tour | May 6th at 10 am– The Morris Street Business District project, an initiative of the Preservation Society of Charleston, in partnership with the Lowcountry Digital History Initiative, represents a geographically small part of the Charleston peninsula. It tells the stories of hundreds of Black and immigrant families, their fight for equality, and their cultural expression through the businesses and institutions they created. Join the PSC and architectural historian, Brittany Lavelle-Tulla, in exploring this unique streetscape and the compelling histories behind some of the district’s most significant sites. Tickets: bit.ly/historicmorrisstreet

Masonic Temple Hard Hat Tour + Reception | May 12th at 4 pm – This Tudor Gothic Revival style building was constructed in 1872 and designed by renowned Charleston architect John Henry Deveraux. Originally, the grand space served as a meeting space for the Freemasons and soon after became a shared space with the Washington Light Infantry. The building’s iconic façade on the corner of King and Wentworth streets only gives a small glimpse of the unique style and rich history. The tour will be followed by light refreshments and the opportunity for further discussion. Tickets: bit.ly/masonictempletour

Virtual Forum with PSC Advocacy Staff | May 20 at 10:30 AM – For those who want to know more about the Preservation Society’s role in public meetings and our work to influence major projects in Charleston, tune in for a live discussion with our advocacy team. You’ll learn about key projects facing Charleston, and have the opportunity to submit your questions to the webinar panelists. Registration: bit.ly/pscforum

KKBE Synagogue Tour (pictured) | May 27 at 12:30 PM – Since Charleston’s founding, the city has had a large Jewish population and is considered the birthplace of reformed Judaism. This magnificent Greek Revival style temple was constructed in 1840 and is the second oldest synagogue structure in the United States and the oldest in continuous use. This tour will be conducted by two of Charleston’s leading historic preservationists: architect, Glenn Keyes and historian, Harlan Greene. Tickets: bit.ly/KKBESynagogueTour

Tickets and registration for events are limited. For more information on Preservation Month programs and to reserve your spot, visit www.preservationsociety.org/preservation-month/ or call 843.722.4630 ext. 17.

Mt. Joy and Trampled by Turtles to Play the Woodlands Nature Reserve in October