The Orlando Solar Bears (25-18-3-1) scored twice in the final five minutes to come away with a wild 7-6 win over the South Carolina Stingrays (19-15-7-3) on Friday night at the North Charleston Coliseum in a game that featured three lead changes and 10 individual multi-point performances between the two clubs.

Dan DeSalvo led the Stingrays with four assists in the contest, Andrew Cherniwchan, Max Gottlieb and Cole Ully each scored a goal and an assist and Darien Craighead posted two helpers. 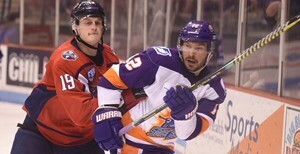 Gottlieb gave the Rays an initial 1-0 lead at 9:13 of the first period when he secured his fourth goal of the year. The play was set up by Cole Ully, who carried the puck through the middle of the Solar Bears’ end and drew the defense his way before he dished it over to Gottlieb at the bottom of the left circle for the strike. Forward Dan DeSalvo earned the second assist on the first tally of the evening.

Orlando came out firing in the second, scoring three straight times to take the lead. Chris LeBlanc found the back of the net at 6:02, before Anthony Repaci netted a go-ahead goal on the power play at 8:10 and Kyle Topping converted on a shorthanded tally to made it 3-1 at 11:31.

Cherniwchan responded quickly after the Topping strike, netting his ninth of the year while SC was still on the power play from Craighead and Gottlieb at 12:23 to make it 3-2.

But the Solar Bears extended their advantage to 4-2 just 32 seconds later when Krystof Hrabik beat goaltender Alex Dubeau at 12:55.

South Carolina got the final strike of a 6-goal second period when Justin Florek picked up his 10th goal of the season to make it 4-3 on the power play from Mark Cooper and DeSalvo at 17:20.

The offense kept coming in the third and the Rays evened the score at 4-4 on Caleb Herbert’s sixth of the season at 4:52. Herbert drove to the net and banged home a loose puck in the crease when an Orlando defender collided with goaltender Clint Windsor. Assists on the tying goal went to DeSalvo and forward Brett Supinski.

Less than three minutes later, Orlando retook the lead at 5-4 on their second power play goal of the evening by J.J. Piccinich at 7:21 of the final frame.

On the ensuing face-off, SC won possession and moved right into the Solar Bears end, wasting no time in tying the contest back up at 5-5 on Ully’s team-leadng 15th goal of the season. The Calgary, Alberta native has now reached the 40-point plateau for the second straight year. Assists on the goal, which came 19 seconds after Piccinich’s tally at 7:40 went to DeSalvo and defender Tyler Nanne.

Then Cam Askew gave the Stingrays their first lead since early on in the second with a low wrist shot that beat Windsor at 10:19 of the third period to make 6-5 SC. Askew’s seventh goal of the year had assists credited to Cherniwchan and Craighead.

Looking to keep his team in front in the final minutes, Dubeau dove to his left to make an exceptional save but was injured on the play and left the game with 5:02 remaining. Rookie netminder Matt Jurusik came on in relief.

The Solar Bears took advantage, scoring just 12 seconds later on a shot from the high slot by Aaron Luchuk to even the game up at 6-6. Then at 16:46, LeBlanc scored his second of the game which turned out to be the game winner for Orlando.

SC attempted a comeback in the final minutes, pulling Jurusik for an extra attacker and earning multiple chances on net, but were unable to find another equalizer.

Both teams found the back of the net twice on the man-advantage, with the Rays finishing 2-for-4 while Orlando ended at 2-for-3. Windsor earned the victory for the Solar Bears with 25 saves, while Dubeau stopped 27 shots before leaving the game and Jurusik turned aside four attempts in relief.

The two clubs will meet again on Friday at the North Charleston Coliseum for First Responders Night at 7:05 p.m.