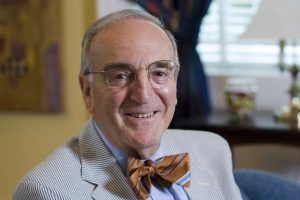 On April 11th, 2021, Conrad Festa (right), one of the College of Charleston’s stalwart leaders and parent of alumnus Daniel Festa ‘93, passed away. Festa joined the College as provost and senior vice president for Academic Affairs from 1987 to 2002. Beloved by the College’s faculty for his optimism and good will, to date Festa, who was the College’s second provost, has had the longest run as chief academic officer.

“Conrad Festa was a beautiful man and a gem in my life, both professionally and as a friend,” says long-time friend and colleague Bob Mignone, professor of mathematics. “An encounter with Conrad was uplifting. Whether professional or personal, his welcoming smile and greeting, his sincere interest and supportive nature, and his patience and willingness to listen always left me feeling better than when I arrived.”

Mignone continues, “During Conrad’s tenure as chief academic officer his keen academic instincts and vision, with the support of two outstanding presidents Harry Lightsey and Alex Sanders, the College experienced a major ascent academically. Recognition followed as did applications.

“Conrad was a prudent manager and when it came to allocating resources he needed to be convinced–never to be taken for granted. I remember a hat that he had on his door that read: ‘Money is my middle name. No is my first,’” recalls Mignone. “It was gratifying for me when my mentor and friend became interim president. Although he led the College for a relatively short time, he did so with his considerable skill, grace and humanity.”

After leaving the College, Festa continued his support of the College, serving on the School of Languages, Cultures, and World Affairs Advisory Board and the President’s Campus Diversity Review Committee. He was also remembered through the Conrad D. Festa Community in Sciences and Mathematics Lecture Series, which was created in his honor and ran from 2001 to 2011.

Festa also assumed the position of president of Educonsultants, a firm that specializes in university faculty professional development and curriculum development, and served as a consultant for the American Governing Boards organization.

Prior to joining the College, Festa taught and held administrative positions at Old Dominion University in Virginia, including those of associate dean of the College of Arts and Letters (1985-1987); chair of the Department of English (1980-1985); and professor of English (1961-1987). Festa founded The Institute for Teaching and Learning in Higher Education at the College of William and Mary in 1978 and served as the institute’s director.

Prior to his academic career, Festa served his nation as an officer of the United States Navy.

Festa had a long and colorful career. He was loved by the College of Charleston community.

“It is a comfort to know that Conrad is with his beloved wife Jean,” says Mignone. “The two were inseparable during their long marriage and his heart was broken when she passed away. He loved his family more than anything else. I know I speak for all his friends when I say, we will miss you Conrad.”