We’ve missed you! We are happy to announce our plans for a full season of live, in-person performances to return this September to the Historic Dock Street Theatre. Now in our 44th season in residence at the Dock Street Theatre, with programming at the Pearl Theatre and West Ashley Theatre Center, we have planned a full lineup of plays and musicals when the curtain rises this fall. “This will be a season of reopening and reimagining,” announced Julian Wiles, Charleston Stage’s Founder and Producing Artistic Director.

“Our first live show, after a 17 month hiatus, will be the Charleston premiere of Steve Martin and Edie Brickell’s acclaimed bluegrass musical, Bright Star— a show that was in rehearsal when Charleston Stage shuttered performances in March 2020. We’re excited to bring this unique, toe-tapping Broadway musical to the Dock Street Theatre stage.

Set in the mountains of North Carolina, this imaginative and original musical of loss and redemption feels like the perfect way to bring full-scale, live theatre back to the Dock Street stage. Of course, we will continue to closely monitor the pandemic situation across the summer and will follow all CDC, State and City guidelines and other COVID safety protocols required at the time of our reopening. The safety of our audiences and performers will be paramount.”

“We are not just reopening,” announced Marybeth Clark, Charleston Stage’s Associate Artistic Director and Director of Education, “we have taken this time while we couldn’t perform live to reflect and reimagine our mission. During our COVID shutdown we engaged in ongoing conversations with a diverse group of community leaders in education, religious, and non-profit organizations across the city, and listened carefully to their experiences and suggestions for how we might improve our programming and broaden inclusion. We are excited to announce a number of new projects in the works that are drawn from these discussions. These include, CityStage, a series of new initiatives to expand Charleston Stage’s programs and partnerships in the community.

CityStage initiatives will include expanded after school programming in underserved schools, new community nights which will offer low cost tickets to our MainStage productions to underserved communities and organizations that serve them, as well as engage in new partnerships between Charleston Stage’s Resident Professional Acting Company and area schools, religious organizations and community groups. In May 2022, a free community tour of Treasure Island Carolina, a retelling of the classic pirate tale set along the Carolina coast, will tour parks, schools and community centers to reach underserved audiences throughout the Lowcountry.”

CityStage will be overseen by a new, still-to-be-named, full-time Community Engagement Coordinator. Our expanded Resident Professional Acting Company members will also be at the forefront of CityStage efforts, both performing and serving as teachers in the expanded educational programming. The Resident Professional Acting Company of ten includes young full-time, professional actors drawn from around the country. They include: 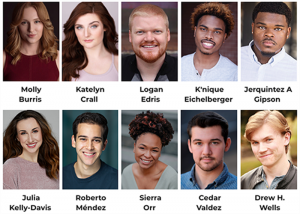 Follow us
Related Topics:charleston stageCharleston Stage Company
Up Next