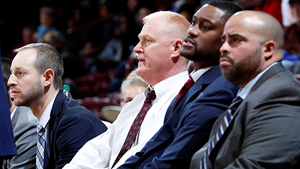 “I believe I have the best staff in America,” Kelsey said. “Having this group of men with me – in this great city and leading this tradition-rich basketball program – is a recipe for great things.”

Davis, a veteran coach with 28 years of experience as a head coach, previously served in the same role the last two years at Winthrop. During his time in Rock Hill, the Eagles won the Big South Conference Championship title in back-to-back years and earned the league’s automatic bid to the NCAA Tournament in 2020 and 2021.

As an assistant at both Winthrop and Pfeiffer University, Davis helped guide the Eagles and Falcons to a combined 100-23 (.813) winning record. He was the head coach for nine seasons at Newberry College from 2010 to 2019 and Pfeiffer for 14 seasons from 1996 to 2010.

Kloman served a key role in the success of the Winthrop program the last seven seasons as an assistant coach under Kelsey. During his time on the staff, the Eagles compiled a 152-65 (.700) winning record and won 26 games in 2016-17, which tied for the third-most wins in program history.

He previously worked as an assistant coach at Tennessee Tech and North Carolina Central. At NCCU, Kloman was a major part of building the program, which went 28-6 overall and to the NCAA Tournament in 2014.

Gray, a three-time All-ACC selection at Wake Forest University from 2002-06, spent the last two seasons as an assistant coach at Winthrop. He closed out his collegiate career as the Demon Deacons’ most prolific 3-point shooter. Gray scored nearly 2,000 points and finished eighth on the school’s all-time career scoring list (1,946 points).

Prior to his time in Rock Hill, he served as Director for Basketball Development at his alma mater Wake Forest. He spent the previous 12 years playing professional basketball overseas, most recently with Tsmoki-Minsk of the Belarusian Premier League.

“Dave Davis is revered and respected in coaching circles across the country,” Kelsey said. “Brian Kloman has a skill set that makes him elite in the most important aspects of college coaching today – recruiting and retention, while Justin Gray is one of the rising stars in our business.”

Foy previously served as the head sports performance coach for men’s basketball the last three years at Winthrop, where he was responsible for all facets of strength, conditioning and nutrition.

He played a large role in the development of Arizona center Deandre Ayton, the No. 1 overall NBA Draft Pick by the Phoenix Suns in 2018. Foy also worked with Top 10 Draft Pick Lauri Markkanen of the Chicago Bulls along with multiple other NBA and overseas pros.

Freesman joins the Cougars in the same role that he served at Winthrop the last two years as Director of Basketball Operations. He previously was the program’s Video Coordinator and responsible for all video operations, including editing, cutting games and film exchange. Freesman also worked closely with the coaching staff on studying and maintaining several analytical projects throughout the year.

Prior to his time in Rock Hill, Freesman spent two seasons at VCU as a graduate assistant as the Rams won 44 games and advanced to the NCAA Tournament in 2017.

Meanwhile, Anthis previously served as graduate manager the last two years at Winthrop under Kelsey, while completing his master’s degree coursework in sports fitness and administration.

Prior to Winthrop, he was an assistant athletic trainer and full-time student manager for the NC State men’s basketball program. He worked with the Wolfpack for three seasons under two different head coaches from 2015-18.

“Zack Freeman and Bret Anthis are smart, organized, creative and hardworking operations and video guys that bring unique skill sets and great energy to the staff.”

Follow us
Related Topics:college of charleston basketballpat kelsey
Up Next

Stingrays Come Up Short To Indy In OT