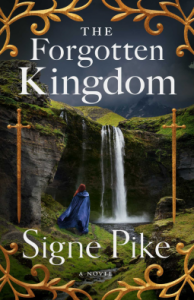 Lowcountry author Signe Pike’s The Forgotten Kingdom, the second novel in the critically-acclaimed “Lost Queen” trilogy, will be released on paperback on June 8th. Praised by the Associated Press, First for Women, and Redbook, Pike continues to detail the real life of a sixth-century Scottish queen believed to be the twin sister of Merlin.

The trilogy is currently being developed as a television series by Made Up Stories after Bruna Papandrea won the rights in a competitive Hollywood auction in 2018.

More about the book:

As Languoreth’s loved ones are scattered to the corners of Scotland’s dramatic landscape, including her twin brother Lailoken, they encounter unspeakable loss, mystical realms, political subterfuge, and new cultures. To protect his people, Lailoken must claim the role that will forever transform him—Merlin. Amidst it all, Languoreth takes the throne as queen, stepping into the test of a climactic battle that will determine the destiny of her family and her kingdom in this meticulously researched, intensely absorbing, and relentlessly compelling new look at one of the most enduring legends of all time—perfect for fans of Outlander and Game of Thrones.