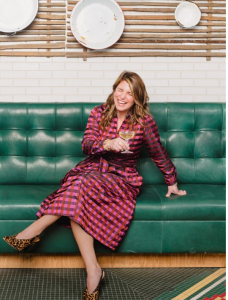 The team at Lenoir, which is named after Howard’s home county in North Carolina, says the restaurant “intends to remind people the South is a nuanced place with a storied history and disparate terrain that shapes us as well as our food traditions. The menu seeks to perpetuate, honor and evolve the cuisine of the rural, agricultural South, and is backed up with hospitality that buys into the idea that food with a story tastes better.”

Dinner menu samples include: butterbean agnolotti with a country ham broth; blueberry BBQ chicken wings; fried collards;  local crudo with buttermilk nuoc cham; a “K-Town” patty melt; and a Peculiar Pig pork chop. The dessert menu is highlighted by pies and cakes like the 10-layer chocolate caramel cake that Howard’s flagship restaurant, Chef and the Farmer, is known for, as well as a yuzu meringue pie with strawberries.

Lenoir’s beverage program will include cocktails, regional beers and spirits, and a wine list curated by sommelier Inez Ribustello.

Howard, who collaborated with local architect David Thompson to design the space, incorporated elements of Eastern North Carolina, like a wall made of tobacco sticks once used on the region’s once-prized cash crop, vintage butterbean pans from Vivian’s collection, and artwork by North Carolina artist Ben Knight. In addition to traditional seating in the dining room, the restaurant will also have a covered patio for outdoor dining.

Lenoir will open first with limited hours, serving dinner from 5 pm to 9:30 pm, Wednesday through Sunday. Later in the season, the restaurant will extend dinner service and launch weekend brunch. Reservations are encouraged and are available on Resy.