The Greenville Swamp Rabbits (19-12-8-2) scored in the opening minute of the game and got 35 saves from goaltender John Lethemon in a 5-3 win over the South Carolina Stingrays (17-14-6-2) on Wednesday night at the North Charleston Coliseum. 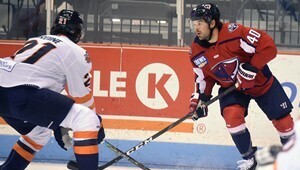 Defender Zach Malatesta led the way for South Carolina with a goal and an assist in a losing effort, while forward Caleb Herbert posted two helpers for the Stingrays.

Greenville’s Gordi Myer scored on the first shot of the game just 20 seconds into the contest to put his team in front 1-0 in the first minute.

But South Carolina responded to even the game at 1-1 on a strike by Malatesta at 3:30 of the opening frame. Malatesta netted his fourth goal of the year on a shot from the left circle that beat Lethemon. Assists on the play went to Malatesta’s defensive partner Chase Stewart as well as Herbert.

The game stayed deadlocked until the final minute of the middle period when Swamp Rabbits’ defender Alec Rauhauser beat SC goaltender Alex Dubeau at 19:32 to give Greenville a 2-1 advantage.

Greg Meireles pushed the visitors ahead by two with a power play goal at 7:51 of the third period, making it 3-1 Swamp Rabbits.

South Carolina made it a one-goal game again less than three minutes later with a power play goal of their own when Justin Florek redirected a puck past Lethemon off a feed by Cole Ully. The strike, which made it 3-2, came at 10:09 with a second assist by Malatesta.

After cutting it to a one-goal game again, the Rays had new life, and continued to dominate possession in search of an equalizer. But their hopes were dashed at 14:47 when Max Zimmer got out on a breakaway and beat Dubeau to give Greenville a 4-2 lead.

The Swamp Rabbits tacked on their fifth goal of the night when Meireles scored his second of the game at 16:55 of the final frame.

With time running out, SC defender Jordan Klimek scored his third goal of the season on a shot from the left point to make it 5-3. The tally came with just 15 seconds remaining in the game and had assists credited to Herbert and forward Brett Supinski.

Both teams struck once on the man-advantage in the contest with Greenville finishing 1-for-2 and SC ending at 1-for-4. By racking up a total of 17 shots in the third period, the Stingrays outshot the Swamp Rabbits 38-32 on the night. Dubeau made 27 saves in a losing effort for SC.

The two clubs will meet up again for two contests this weekend in Greenville at the Bon Secours Wellness Arena beginning on Friday night at 7:05 p.m.