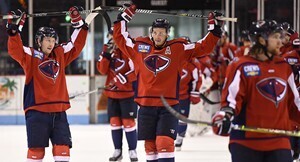 Cole Ully posted four points on a goal and three assists and Hunter Shepard turned aside 38 shots to give the South Carolina Stingrays (17-13-6-2) a 4-3 win over the Orlando Solar Bears (20-15-3-1) Sunday afternoon at the North Charleston Coliseum.

The victory gave SC the edge in their 3-game weekend series with Orlando, claiming decisions on back-to-back days.

After the Rays defense, anchored by Shepard, fended off many Solar Bears chances early in the opening frame, Stingrays’ captain Andrew Cherniwchan struck for the first goal of the afternoon with a wrist shot from the slot to make it 1-0. His seventh goal of the season came at 17:25 with assists from Ully and forward Caleb Herbert.

1:02 later, Justin Florek scored his eighth goal while SC was on their first power play chance of the day to push the lead to 2-0. Florek was set up in front by Dan DeSalvo, while Ully recorded the second assist on the goal which came at 18:27.

Orlando got back within one at 4:53 of the second period when Tristin Langan scored to make it 2-1.

Ully had a quick response just 48 seconds later, however, scoring his team-leading 13th goal of the year on a breakaway set up by defender Ryan Cook. DeSalvo earned the second assist on the play for SC, who led 3-1 after 40 minutes.

The Solar Bears cut the lead to 3-2 at 53 seconds of the final frame on a goal by Nolan Valleau.

But just as they did after allowing their first tally, the Rays didn’t waste time responding with one of their own as DeSalvo found the back of the net for his ninth tally of the year at 4:43 of the third. Once again set up by Ully, the Rolling Meadows, Ill. native one-timed the puck past goaltender Clint Windsor for SC’s second man-advantage goal of the day. Florek was credited with the second assist on the play, which gave the Stingrays a 4-2 lead.

Orlando’s Jerry D’Amigo got his team one closer with an extra attacker on the ice at 16:20 of the third, but South Carolina stood tall in the final minutes to secure the win, backed by Shepard who took care of any late shots that came his way.

The Rays finished 2-for-4 on the power play in the game and successfully held the Solar Bears off the board on the man-advantage at 0-for-2. Windsor finished with 27 saves in a losing effort for Orlando, who outshot SC 41-31 in the game.

Next week the Stingrays are back in action for four games against their in-state rival the Greenville Swamp Rabbits, beginning on Wednesday night at the North Charleston Coliseum at 7:05 p.m.

Cougars Walk Off With Series Win Over Seahawks

Stingrays Light Up Scoresheet in 6-3 Victory