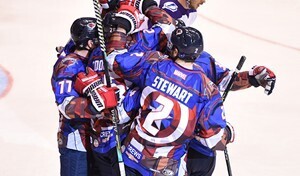 South Carolina forwards Dylan Steman and Cam Askew each scored twice, while Dan DeSalvo had two assists and goaltender Alex Dubeau made 29 saves to boost SC in the win.

Although Orlando went 0-for-3 on the power play in the first, Tyler Bird’s quick wrist shot gave the Solar Bears a 1-0 advantage at 12:51 of the opening frame.

The Stingrays responded at 18:14 after Cam Askew blasted his fifth goal of the year off the inside of the left and past Orlando goaltender Kris Oldham to knot the game at 1-1. Askew’s beauty was assisted by blueliner Max Gottlieb, who earned his 10th helper of the season.

34 seconds later, Tyler Bird batted a pass out of the air and into the net past Dubeau for a highlight reel play to boost Orlando to a 2-1 lead before the end of the period at 18:48.

After a rocky end to the first period after a hit on Caleb Herbert, the fireworks carried into the middle stanza when Mark Cooper went toe-to-toe with Orlando defenseman Kevin Lohan, both receiving five minute fighting majors just 47 seconds into the second.

The fight put a spark in the Rays step, and Askew would net his second of the game right at the 7:00 mark, tying the game back up at 2-2. Askew’s scrappy goal came with help from rookie Marc Johnstone, who got the primary assist for his first point in his first professional game. Defenseman Macoy Erkmaps, who returned to SC this week from the AHL’s Hershey Bears, posted the second assist on the play.

Just a 1:40 later, Steman scored his ninth goal of the season with an assist from DeSalvo on a very determined second-chance effort to give the Rays their first lead of the game 3-2 at 8:40.

The third period would bring a heavy offensive output for South Carolina, with three different Rays scoring in the final frame. Mark Cooper started things off with a powerful move to the front of the net and saw the puck trickle past the goal line for his fifth of the year to put SC up 4-2 at 9:17. Assists on the play went to DeSalvio and forward Cole Ully.

Steman added to the insurance for South Carolina at 10:19, extending the Rays lead to 5-2 off a setup by defender Ryan Cook and team captain Andrew Cherniwchan.

Orlando didn’t stop their pressure, however, as Joseph Garreffa roofed a shot over Dubeau at 11:37 to make the game 5-3, giving the Solar Bears a chance to make a late push.

South Carolina responded with their sixth tally of the evening when forward Tim Harrison found Brett Supinski at 14:45 for another snipe that made it 6-3 Stingrays. Steman recorded the second assist on the play for his third point of the night. The Hanover, Minn. native was later awarded the first star of the game.

The Solar Bears went 0-for-4 on the power play, as did the Stingrays, who could not find the net on the man advantage. Orlando held on to a small shooting differential, 32-31, while Oldham made 25 saves on 31 shots in a losing effort.

The Stingrays and Solar Bears will wrap up their 3-in-3 series on Sunday afternoon at the North Charleston Coliseum for Purple Heart Appreciation Day at 3:05 p.m. SC will honor all Purple Heart recipients in attendance for the contest.