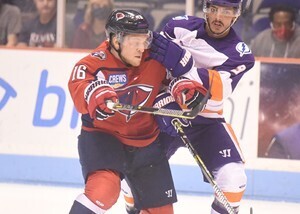 The South Carolina Stingrays (15-13-6-2) scored the first three goals to get out to an early lead but were unable to hold off a comeback by the Orlando Solar Bears (20-13-3-1) Friday night, falling by a final score of 6-3 at the North Charleston Coliseum.

South Carolina tallies all came in the first period from forwards Brett Supinski, Justin Florek and Cam Askew, while goaltender Hunter Shepard made 37 saves in a losing effort.

Supinski swiped the puck free deep in the Solar Bears’ zone and let go of a quick wrist shot that beat goaltender Clint Windsor over the right shoulder to make it 1-0 Stingrays at 8:50 of the opening period. Supinski’s eighth goal of the year came unassisted.

Less than two minutes later, Florek cashed in on a rebound in front to make it 2-0 South Carolina with his seventh goal of the season. His tally came at 10:23 with assists by Dylan Steman and Andrew Cherniwchan.

Askew scored his fourth of the year off the rush on a wrist shot from the high slot that pushed SC’s advantage to 3-0. The play was started by defender Chase Stewart, who was credited with the lone assist on the play, his first as a member of the Stingrays.

But Orlando scored the next three goals to get themselves back in the game and tie up the score at 3-3 before the close of the second stanza. Kyle Topping put the Solar Bears on the board at 14:18 of the first, before J.J. Piccinich netted a goal at 1:30 of the second and Topping scored his second of the game on the power play at 12:49 of the middle frame.

Tristin Langan scored twice in a 4-minute span for Orlando in the third, giving the Solar Bears their first lead of the night at 4:29 before adding a tally to make it 5-3 at 8:29.

A late power play for SC with under five minutes to play in the game allowed the team to pull Shepard in favor of an extra attacker for a 6-on-4 advantage. The Stingrays were unable to solve Windsor in the final minutes and Orlando added on an empty net goal by Jerry D’Amigo to seal the game.

The Solar Bears went 1-for-3 on the power play while holding South Carolina off the board on the man-advantage at 0-for-5. Orlando also led in shots on goal, 43-34, while Windsor stopped 31 shots in net to earn the victory.

The Stingrays and Solar Bears continue their weekend series on Saturday night at the North Charleston Coliseum for Marvel Super Hero Night at 6:05 p.m. SC will wear specialty Captain America jerseys in the contest, which will be auctioned off during the game via DASH Auction.

Bucs unable to rally back in 35-17 loss to Monmouth