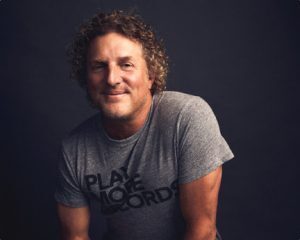 “A Little More Rock N Roll” is taken from Bryan’s upcoming solo album Midlife Priceless, which is due out on April 2, 2021 on Stone Point Records. The lyric video for the song was directed by John Barnhardt, and features VHS footage from 1993 of Hootie & The Blowfish on a road trip for a gig opening for a group called Dread Zeppelin.

“It was the first time we ever played Buffalo,” Bryan said. “We were opening for Dread Zeppelin, and I’m thinking it was ’93. I know we stopped at the Pro Football Hall of Fame in Canton, Ohio on the way there. Apparently I was dipping Gold River chewing tobacco at the time, and spitting into an empty milk carton.”

Bryan provided the following background about the new single:

“It was May of 2019, Hootie was about to embark on our first U.S. tour in over ten years, and we had just made our first full-length album in over ten years. Capitol Nashville decided a single for country radio would give us the best shot at getting played.

“I immediately thought of my ridiculously talented friend, Steven Fiore from the band Young Mister. I’m a huge fan of the tunes that he writes for his band, but he also has this stealth ability to craft a perfect pop-country song. So I told him about the situation with Hootie, and Capitol, and he sent me the demo for ‘A Little More Rock N Roll.’

“I felt an immediate, nostalgic warmth when I heard it. Capitol sent us some other songs, including a gem Chris Stapleton had written, ‘Hold On,’ and there was no denying it was a solid choice, but I couldn’t get Steven’s song out of my head.

“In March of 2020, I started tracking for Midlife Priceless. I laid a couple of 12-string guitar tracks down for ‘A Little More Rock N Roll,’ and it was already special.

“I had my friends Tim Nielsen (Bass), and Matt Zutell (Drums) come over, and I played lead, electric guitar as we tracked along with the 12-strings. I felt like I should add lap-steel to the track, to try and mix a little twang in with the rock ’n’ roll we were creating.

“We put it through a Leslie speaker cabinet, and it just put this sweet icing on everything. It started to sound like a single!”

Without further ado, here’s the video!: