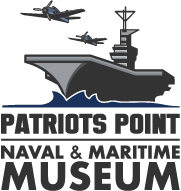 Due to health safety measures related to COVID-19, there will not be a planned ceremony. Charleston food trucks The Pita Stroller and Delight’s Desserts will operate from 10:30 am to 2:30 pm. Parking will cost $5.

Patriots Point is open every day from 9 am to 6:30 pm and is home to the Vietnam Experience, a three-acre re-creation of a Brown Water Naval Support Base and Marine Fire Artillery Base. The exhibit opened in 2014 and features audio and visual technology that brings the war to life in a respectful way.

On Vietnam Veterans Day 2019, a display about Special Forces in the war opened to the public. The exhibit explains how Green Berets in the U.S. Army relied on oppressed tribe people known as Montagnards to help fight the North Vietnamese Army and the Viet Cong. Special Forces trained more than 60,000 Montagnards to use modern weapons and warfare techniques.

The next enhancement project planned for Patriots Point’s Vietnam Experience (VE) is the restoration of a Mark 1 Patrol Boat, River (PBR). The PBR was a versatile boat with a fiberglass hull and water jet drive, which enabled it to maneuver in shallow, weed-choked rivers during the war. The vessel has been displayed in VE lagoon since the exhibit opened in 2014. As part of a commitment to Vietnam veterans, the USS Yorktown Foundation is currently raising $15,000 through a month-long campaign to fund repair work throughout the entire vessel. As of March 23rd, private donors have already contributed more than $13,000 through a Facebook fundraiser (www.facebook.com/patriotspoint.org) and the Foundation (www.ussyorktownfoundation.org).

Patriots Point Naval & Maritime Museum is a partner of the Department of Defense’s Vietnam War 50th Anniversary Commemoration. Visit www.patriotspoint.org for more information about the museum.

Charleston Coffee Shop The Daily to Open in Atlanta