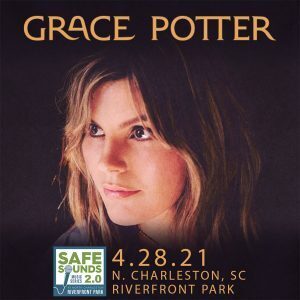 Ear For Music, AC Entertainment, REV Federal Credit Union are today announced that both Grace Potter and Pigeons Playing Ping Pong will perform at North Charleston’s Riverfront Park as part of the Safe Sounds 2.0 concert series. Tickets for both shows go on sale Friday, March 26th at 10 am.

Singer, songwriter, and multi-instrumentalist Grace Potter will perform on Wednesday, April 28th. Described by Spin as “one of the greatest living voices in rock today,” Potter has not only played every major music festival from Coachella and Lollapalooza to Bonnaroo and Rock in Rio, she’s created her own thriving music festival, Burlington, VT’s Grand Point North. Additionally, she’s shared a stage with artists such as The Rolling Stones, Willie Nelson, Robert Plant, the Allman Brothers, Neil Young, Jackson Browne, Mavis Staples, and The Roots to name just a few.

A three-time GRAMMY-nominated artist (two for 2019’s Daylight, one for her multiplatinum duet with Kenny Chesney), Potter has also collaborated with the Flaming Lips for a Tim Burton film, and written and produced music for film and TV, including Disney’s animated feature Tangled and the ABC animated holiday special Prep & Landing: Naughty vs. Nice. 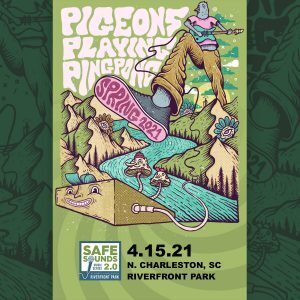 Pysch-funk quartet Pigeons Playing Ping Pong will perform at Riverfront Park on Thursday, April 15th. Hailed as “musical explorers” by Rolling Stone, the band first took flight roughly a decade ago at the University of Maryland, and have since gone on to play more than a thousand shows across 44 states. In just the past two years alone, the band has co-billed at Red Rocks, played halftime at Madison Square Garden, performed on Adult Swim’s FishCenter Live, celebrated the tenth anniversary of their beloved music festival, Domefest, and even earned their first headlining arena show.

The first “Safe Sounds 2.0” show to be announced was the May 6th performance that will be headlined by Goose, a Norwalk, CT-based quartet.

Here are some of the COVID precautions the event series will be taking:
Riverfront Park can be found at 1001 Everglades Avenue in North Charleston. 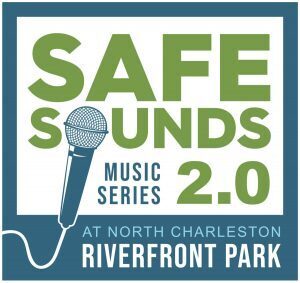