If you’re looking at opening a weed dispensary or headshop in South Carolina, there are a few reasons that 2021 could be the perfect year for it.

Many advocates believe 2021 will be the year that marijuana gets legalized for medical use in South Carolina. Legalization in the Palmetto State would boost the number of consumers and increase the demand for weed across the state.

From looking at the legislation passed in other states, we can clearly see that legalization for recreational use is often not too far behind legislation for medical marijuana.

Most US states have passed some level of cannabis reform, with around 10 states considering it fully illegal. Tom Angell, the editor of Marijuana Moment and a 20 year veteran in the fight for cannabis law reform, put out a Tweet on the 4th of March expressing surprise that 25 states are considering bills to fully legalize cannabis this year. 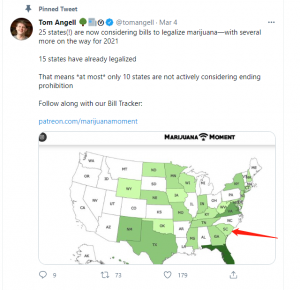 South Carolina, as you can see, is by its green shade in this Tweet, is among those states with legislation coming up this year. Advocates for SC to establish a legal, medical marijuana program include those from health care, criminal justice reform, and veterans groups. It would appear voters are firmly behind such legislation, with one poll showing support for legalizing medical marijuana lead by a ratio of five to one.

There are bills in both the House (HB 3316) and Senate (SB 150) under the same name, The South Carolina’s Compassionate Care Act. The Senate Bill, SB 150 was filed by Sen. Tom Davis, R-Beaufort, Author of several previous bills attempting similar allegations since 2015 but without success. However, with the overwhelming support of public opinion and 5 years of vetting, this time around feels different. In part because it’s one of the few issues across the state that enjoys bipartisan support.

It had been scheduled for a hearing on the 18th of March, so hopefully, it won’t be too long before we know the results.

New legislation that was inserted into the December COVID relief bill made amendments to the Prevent All Cigarette Trafficking (PACT) Act. The broad wording of this legislation essentially treats CBD and cannabis vaporizers in the same way as tobacco and e-cig products. This will require a lot of extra paperwork for those selling online as it requires them to register with each tax office in every state, source and set up new shipping channels, and also report all their online sales every month.

All this extra paperwork makes it much hard to send vaping devices and accessories through the mail. In fact, many smaller vaping companies and e-liquid/CBD oil providers have already said they will not continue selling online to residential addresses as the cost of these changes is too high for them.

Most online headshops like Lookah will continue to sell wholesale and to businesses with the correct registration, so business will be largely unaffected.

Many postage firms like UPS, FedEx, etc., will no longer deliver B2B, so this will create some disturbances in the market.

USPS has agreed to continue B2B deliveries but will no longer deliver to residential addresses. The result is that many more people will likely be turning to headshops to buy their CBD vape supplies in person. This should boost revenue at brick and mortar stores stocking these types of products. It won’t just be vapes supplies. The increased footfall of more customers coming through the door allows the savvy business to upsell and introduce new products to customers who otherwise wouldn’t see or be able to buy them.

According to Senate and Marijuana Policy Project analysis, if the proposed bills were adopted, it could generate $112 million in taxable revenue and see 1500 to 2000 jobs created in the first year alone.

Taxed at about 6%, that will add a sizable chunk of much-needed revenue following the past year’s difficulties.

With the state’s budget ravaged by last year’s events, it’s likely the promise of such jobs, and revenue windfall could spur on the legislation sooner.

It’s clear that the legalization of marijuana will create many new jobs, add to tax revenues and help the redevelopment of communities that have often suffered economic hardship.

Both the house and senate bill calls for licenses to be issued, allowing for 15 cultivators, 30 processors, one dispensary for every 20 pharmacies in the state, and four transporters, as well as 5 independent testing labs. This would be a fairly sizable market. Another factor that determines the market size for medical marijuana is the qualifying conditions for patients.

The good news is that both house and senate bills offer more than a dozen qualifying conditions for medical marijuana patients, such as cerebral palsy, multiple sclerosis, and PTSD.

However, only the house bill allows for chronic pain as one of these conditions.

This is key as it’s generally seen as the leading driver of medical marijuana sales, with PTSD not far behind. If the house bill passes, we can expect a much larger take-up for medical marijuana.

Online Casino Malaysia- Why Should You Choose To Gamble Here?