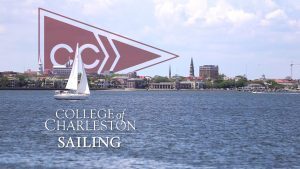 The College of Charleston sailing team successfully defended its title at the Bob Bavier Team Race on Saturday and Sunday at the J. Stewart Walker Complex, as the coed team won 13 out of 15 races to finish atop the standings with a three-win advantage over second-place Tulane.

Jack Brown, Paris Henken, Hunter Skinner and Benn Smith skippered the Cougars to 4-1 marks in both the first and second rounds to end the day Saturday with a narrow one-win advantage over Tulane. The coed team would finish the weekend in style on Sunday sweeping round three to end the regatta three wins clear of the Green Wave. Jack Sutton, Peter Barron, Noelle Owen, Hannah Kinder and Skinner all crewed for the coed team.

The women’s team registered one win in each round to finish the regatta in fifth place with a 3-12 record. Marian Williams, Kelly-Ann Arrindell, Grace Squires and Kiera O’Reardon skippered for the women’s team with Roxanne Snyder, Cara Samson, Anna Sherry and Julia Jeffries each crewing for the Cougars.

Charleston returns to the water on Saturday, March 27th and Sunday, March 28th in a scrimmage at the United States Naval Academy in Annapolis, Md.

Follow us
Related Topics:college of charleston Sailing
Up Next