Three power play goals and 32 saves from goaltender Hunter Shepard helped the South Carolina Stingrays (15-12-6-2) pick up a 5-2 win over the Fort Wayne Komets (10-4-2-1) Sunday afternoon which earned them a sweep of the weekend series between the two teams at North Charleston Coliseum.

Justin Florek starred in the game for the Stingrays, scoring two power play goals and an assist, while Dan DeSalvo had a goal and an assist and Cole Ully notched three helpers.

DeSalvo opened the scoring on the power play by knocking a rebound past goaltender Jeremy Helvig at 13:14. The initial shot came from defender Zach Malatesta, while Ully was credited with the second assist on the first strike of the afternoon that made it 1-0. 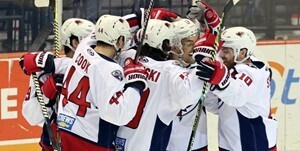 Later in the frame during a penalty kill for SC, forward Tim Harrison caught a headman pass from Florek and broke in alone to the Fort Wayne end before burying a backhand shot to the top right corner of the net. Harrison’s third tally of the year put the Rays on top 2-0 at 19:25.

But Fort Wayne responded just 16 seconds later to make it 2-1 when Brandon Hawkins redirected a shot past Shepard to get his team back within a goal before the end of the first period at 19:41.

The Stingrays broke open the game in the middle frame, scoring twice while outshooting the Komets 13-11. Florek netted his first of the night on the power play at 2:43, tapping home a pass by Ully from right in front of the net. With SC opening up a 3-1 lead, a second assist on the play went to Malatesta.

Darien Craighead extended the advantage to 4-1 with his second goal in as many games and sixth of his rookie season on a rebound from Brett Supinski and Dylan Steman at 12:51.

After receiving a cross-check in the back from Fort Wayne’s Morgan Adams-Moisan, Florek won the face-off to start the ensuing power play and eventually banged home a rebound for his second goal of the day 31 seconds into the third. The goal to put SC ahead by a 5-1 margin came with assists from DeSalvo and Ully.

Fort Wayne got one closer at 12:49 of the third when Adams-Moisan scored on the power play, but was unable to put anything else past Shepard and the Stingrays held on for a 3-goal victory.

South Carolina finished 3-for-5 on the man-advantage in the game, while the Komets went 2-for-4 on the power play. Fort Wayne led in shots on goal, 34-23. Helvig stopped 18 shots for the Komets in a losing effort.

The Stingrays are back at the North Charleston Coliseum on Wednesday night to face the Jacksonville Icemen at 7:05 p.m. before hosting the Orlando Solar Bears next weekend for three straight contests March 26-28.