Goaltender Alex Dubeau made 19 saves in the second period and 38 overall in the game to give the South Carolina Stingrays (13-12-6-2) a 2-1 win over the Fort Wayne Komets (10-2-2-1) on Friday night at the North Charleston Coliseum. 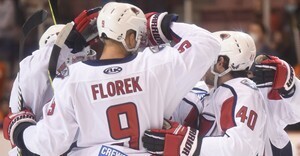 The Rays took a 1-0 lead at 11:06 of the opening frame when Cherniwchan beat goaltender Jeremy Helvig with a turnaround shot from right in front of the net. The captain’s sixth goal of the season came with assists from defenders Cook and Gottlieb. For Cook, the helper was his first ECHL point, coming in his third game with South Carolina.

But Fort Wayne evened the game at 1-1 in the final minute of the period. After Dubeau stopped the first shot on an offensive zone rush, the puck found Zach Pochiro on the backdoor for his ninth tally of the year at 19:28.

Despite a 19-6 shots advantage for the Komets in the second, Dubeau was perfect in the period and kept the score even at 1-1 as the teams headed to the final frame.

A face-off win by DeSalvo found Cooper on the right hash and a quick redirect got past Helvig to put SC back in front 2-1 just 1:03 into the third.

The Rays were able to hold off any chance of a comeback by Fort Wayne later in the period, allowing just nine shots on net in the final stanza.

Neither team was able to convert on the power play, with the Komets finishing 0-for-2 while SC ended at 0-for-3. Fort Wayne had a 39-25 advantage in shots during the contest, with Helvig turning out 23 attempts.

The Stingrays and Komets meet again on Saturday for the middle night of their 3-game series at the North Charleston Coliseum at 6:05 p.m. Saturday is Pucks & Paws Night, where fans can bring their dog to the game!