This weekend Palmetto Brewing is throwing it back to the carefree days of the early 90s to celebrate the release of their latest brew.
–
Here’s how the city’s oldest brewery describes this weekend’s festivities:
–
The year was 1993. Neon colors and fanny packs were the fashion. Grunge had finally become a commercial success. Yours truly, Palmetto Brewing Company, was founded. The 90s were totally radical, and so is our latest 843-Series seasonal release. Blueberry Backtrack starts with noticeable yeast-derived banana and clove notes and finishes refreshingly with a bright blueberry sweetness. Soft with minimal hop bitterness. Dig out that massive CD suitcase and dust off that CD burner. Just remember – those portable players only had 30 seconds of anti-skip.
–
Join us for a weekend of March Madness, release specials, live music and grungey good food from Gobble Gobble. Games, prizes, and more!
–

Here’s a look a the schedule:


You can learn more here. 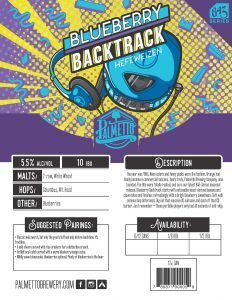 Pet Helpers to Host “An Intimate Evening with Trey Taylor”