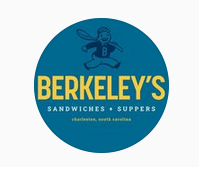 Local hospitality veterans Marc and Elizabeth Hudacsko this week announced the opening of their first restaurant, Berkeley’s, which is expected to open at 624 ½ Rutledge Avenue this spring. They say the restaurant will be “a casual, neighborhood spot serving great sandwiches, suppers, wine, and beer for dine-in or take-away.”

The couple has been working in the local hospitality community since moving from New Jersey to Charleston in 2016. Marc was the opening general manager and Elizabeth a bartender for the team at Little Jack’s Tavern. The duo later opened the popular pop-up, We Flew South, which gained a loyal following for their Reubens and classic cheesesteaks, both of which will be found on the Berkeley’s menu.

The couple says Berkeley’s menu is somewhat of an homage to their Northeastern roots, featuring classic American fare like Chicken Cutlet Sammies, Meatball Parmesans, and French Dips, alongside salads, shareable appetizers, and entrees like Cavatelli with Braised Lamb and Roasted Salmon with Fregola and Feta.

Takeout will be a main focus, with a variety of to-go “Berkeley’s Boxes” to feed a family, office, or group of friends. In addition to food, Berkeley’s will serve a variety of wine, spritzers, and craft beers, all available to take home at a discount.

The space, which formerly housed Uneeda Sicilian, is undergoing renovations and will ultimately feature an indoor dining room, bar, and outdoor seating on the newly remodeled patio.

Berkeley’s will be open for lunch and dinner 6 days a week. Follow Berkeley’s journey on Instagram and visit eatatberkeleys.com for more information.