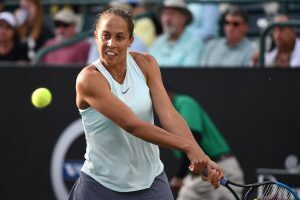 Charleston Tennis, LLC, which owns and operates the Volvo Car Open, will host an additional WTA tennis tournament this spring on Daniel Island. The Charleston 250, running from April 10th to 18th, will immediately follow the Volvo Car Open (April 3rd to 11th), at LTP Daniel Island Tennis Center. Both events will be held without spectators due to the ongoing pandemic.

Leading the Charleston 250 field is No. 1 seed Madison Keys (right). The American has had great success on Charleston’s green clay, winning the Volvo Car Open in 2019 and reaching its final in 2015. In addition to Keys, other top players in the field include Grand Slam champion Sloane Stephens, Amanda Anisimova, Jessica Pegula, Coco Gauff, Danielle Collins and Charleston native Shelby Rogers.

The Charleston 250 will feature a 32-player draw made up of 23 direct entries into the tournament, four wild cards, four qualifiers, and one special exempt. In addition to the qualifying and singles draws, the tournament will also host a doubles tournament.

“When the Billie Jean King Cup Final canceled its event, which was originally scheduled for the week after the Volvo Car Open, WTA Tour CEO Steve Simon approached our team with the opportunity to host a WTA 250 level event,”said Bob Moran, Tournament Director. “After consulting with ownership, we quickly determined that a consecutive event in Charleston would provide players with a consistent and stable environment to compete and decided that moving forward was the right thing to do. The WTA Tour is a true partnership between players and the tournaments, which means we have to work together for the betterment of the Tour. Our decision to host this event is a reflection of our partnership and commitment to supporting players.”

Both Tennis Channel and WTA Media have agreed to broadcast the tournament, providing a full week of coverage and live tennis for fans both in the U.S. and abroad.

For more information on the Charleston 250, visit volvocaropen.com and tune into the Volvo Car Open’s (@VolvoCarOpen) social media channels throughout the tournament.

Black Lives Matter: The Historic Importance of the Movement