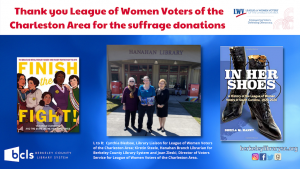 Berkeley County Library System recently received a donation of two book titles that will provide information to young adult readers on the suffrage movement and, for adult readers, the history of the League of Women Voters in South Carolina for the past 100 years.  The donations were made in honor of the 100th Anniversary of the League of Women Voters and the centennial of the 19th Amendment, which gave women the right to vote.

“I am grateful that the League of Women Voters thought to donate these items to BCLS,” said Kirstin Steele, Librarian at Hanahan Library. “It’s important to be part of the community and especially nice to have books of state and local interest donated to the system.”

Locals can Hop On Down To Wild Dunes Resort This Easter