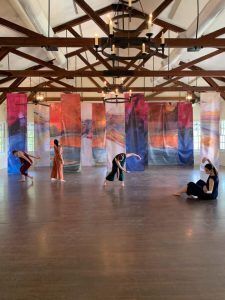 Annex Dance Company’s newest work Behind, Beyond, Between will have a virtual premiere on March 26th, 2021 at 7 pm. Created in collaboration with visual artist Leslie Alexander, Annex Dance Company filmed the work at Alhambra Hall, a venue which provided an opportunity for the choreography and artwork to share the performance space. This is a free performance and will stay available online at bbb.annexdancecompany.org until April 18th, 2021.

Season 14 marks 11 years in Charleston for Annex Dance Company, and artistic director Kristin Alexander has embraced the challenges of live performance with a season of new digital content.

“It has been quite a year for everyone, and I am grateful that we as a company leaned into the challenges and found a way to continue to create and share work,” Alexander said. “By pivoting our season to a virtual platform for classes, collaborations, and performances, we’ve stayed busy with new ideas and more time to develop work.”

Behind, Beyond, Between had always been slated for a 2021 premiere, but the change in the season caused the company to take out any existing physical connection choreographed prior to March 2020.

“The past 12 months have reminded me of the value of embracing the unknown and deeply investigating repertory,” Alexander said. “I have revisited work many times over the years, but never have I taken 18 months to develop a new piece.”

Leslie Alexander’s painting series Pathways and Portals, was the starting point and inspiration for Behind, Beyond, Between. As Leslie states in her Pathways and Portals artist statement, “Following my strokes on a canvas takes me to places I have never been before….somewhere over there, underneath, behind, beyond, between.” The Behind, Beyond, Between choreography took shape from selected images in the series, as well as new work that Leslie created during the Summer of 2020. Leslie’s statement also comments on the idea of liminal space as “a place of transition between what ‘was’ and what is ‘next’.” Reflecting on that idea, Kristin states, “The pandemic allowed the piece to become what it was meant to be. Leslie started creating new work and we were responding to a new creative process dictated by distance and masks. It still felt connected to Behind, Beyond, Between’s starting place in 2019.”

Just as Leslie allows the strokes on the canvas to take her to places she has never been before, Kristin responded to images, colors, and close examination of the paint on the canvas as inspiration for the choreography. Not every section is connected to a specific painting, more as a response to the larger grouping of Leslie’s work that Kristin and Leslie designated as the Behind, Beyond, Between artwork. Three pieces from the collection were selected as the backdrop for the performance. These paintings, created on canvases as small as 18×24 inches, became thirteen 12-foot long panels hung from the rafters. In the final weeks of rehearsal, consideration and interaction with the art shaped the performance.

Annex Dance Company will re-release the Fall 2020 virtual preview of Behind, Beyond, Between starting March 16th. This virtual preview includes a conversation between Kristin Alexander and Leslie Alexander, four sections of Behind, Beyond, Between, and a number of Leslie’s paintings. The full virtual performance filmed at Alhambra Hall will be available on the company’s website starting March 26th at 7:00pm. The preview and performance can be viewed at bbb.annexdancecompany.org.

Audience members are also invited to a virtual Q&A session with the artistic directors, company members and Leslie Alexander on March 28th at 7:00pm. A Zoom link to join this session will be available at bbb.annexdancecompany.org on March 26th.

To find more information about the performance and to explore the behind-the-scenes creative process, please visit the Annex Dance Company Facebook page, or follow the company on Instagram @annexdancecompany.