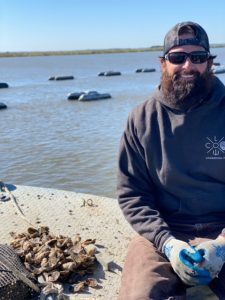 Nobody can ever know if the Roman god Neptune was passionate about oysters, but Trey McMillan (right), the Founder and President of Lowcountry Oyster Co., most certainly is.

Oyster Co. tee-shirts feature a sketch of the black bearded Trey – “Yeah. That’s me.” The image depicts him with a set of Neptune’s tridents crossed behind his head. This imagery whimsically evokes the comparison with the god of freshwater and the sea.

McMillan, a Charleston native, was a long-time fisherman before opening Lowcountry Oyster Co. in 2016. During his days fishing for marlin, he was away from home five months of the year. He traveled the eastern seaboard and also to many parts of the world. Then, one summer, docked in Chesapeake Bay, he saw the cultivation of oysters using mesh bags in floating cages.

“I was fascinated by that,” he said.

Inspired by this technique, he started his own business with a small team of family and friends in Green Pond, SC. McMillan says the business is expanding with the acquisition of more farmable space, building the scale of the oyster farm as sales grow.

It’s an intensely hands-on, 24/7 job that brings him a great deal of satisfaction. The oysters start off in a nursery as baby oyster seeds, “the size of coffee grounds,” he says. When they reach 6-8mm, the size of a small fingernail, they are transferred to cages. They are regularly graded by size by running them through tumblers and then placed in mesh nets with others of the same size to continue growing.

“They grow better grouped by size,” McMillan said. “And they are harvested all year round.”

Surprising the newcomer to this kind of farming, the oysters are not fed by the cultivator.

“They get everything they need from the water in which they live,” he said. “They’re like mini natural filters.”

So, of course it’s essential that this process occurs in very clean water, well away from potential toxins. As the oysters are nourished from the water, in turn, the oyster filtration of water makes it more habitable for crabs and other water creatures.

Once the oysters are mature, plump, and delectable, they are packed, picked up by restaurants and wholesalers, or mailed out to individual customers who order online and receive their nationwide.

Lowcountry Oyster Co. does not host specific events, but an associate serves as a liaison working with community groups that host oyster roasts as fundraisers and helps coordinate big group celebrations that feature oysters as a delicious Lowcountry specialty.

How best to serve oysters? McMillan likes them best raw, but he’s also a big fan of the way his wife prepares them for the grill basted with a mixture of olive oil and basil.

“Those are my two favorites.”