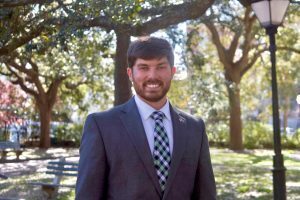 Bowden said he is running because he believes that West Ashley, and all of  Charleston, is at an inflection point.

“West Ashley faces unprecedented challenges from flooding and traffic,” he said. “Right now, developers are pouring concrete in our wetlands while residents are left searching for a voice of reason. District 10 needs a leader who is dedicated to service to protect our homes from flooding, shorten commutes that rob us of our quality of life, and make government work for us.”

Bowden graduated from Old Dominion University with a degree in History and Political Science. He then went on to receive a law degree from the University of South Carolina School of Law. After completing law school, he moved to Charleston to begin his legal career at a firm that represented homeowners. Bowden says he enjoyed helping people who had devastating problems with their homes, however he felt the call to public service, and decided to join the Charleston County Public Defender’s Office where he fights to protect people in the criminal justice system.

Bowden says he is  particularly proud of his work with the Veteran’s Treatment Court where he represents military veterans who are working with the VA to address addiction and mental health issues while earning another chance at life.

“The next four years will define Charleston for generations to come,” Bowden said. “If we continue to play childish political games then we will all sink. Instead, we can choose a new direction and work to build the most resilient coastal community in the world. A community that prides itself on its bridges, not its barriers. A community that is defined as much by its future as it is by its past.”

Bowden is married to his college sweetheart, June, who is a special education teacher at an  elementary school in District 10. They live in Shadowmoss with their dog, Zane.

Follow us
Related Topics:Charleston City CouncilStephen Bowden
Up Next