Florida Everblades (23-8-0-2) goaltender Jake Hildebrand earned a 29-save shutout and Michael Huntebrinker scored twice in the third period during a 4-0 win over the South Carolina Stingrays (12-12-6-2) Friday night at Hertz Arena. 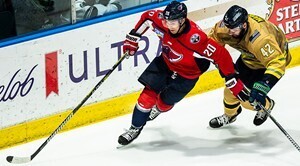 Goaltender Hunter Shepard turned out 31 shots in a losing effort for South Carolina, who was blanked for the first time during the 2020-21 season.

The two clubs were scoreless after the first 20 minutes, with Florida out-shooting SC 12-9 after the opening frame.

Colby Sissons put the Everblades in front 1-0 during the middle frame, scoring on a power play opportunity at 13:14. Florida once again had the edge in shots on goal in the second by a 13-9 margin.

At 5:01 of the final frame, Florida’s Levko Koper extended the advantage to 2-0 with his 10th goal of the season.

Huntebrinker picked up both of his tallies in the final five minutes of the third, posting a power play goal at 15:50 and an even-strength marker at 18:09 to seal the victory for the Everblades.

Florida finished with 35 shots on goal, while the Stingrays ended with 29. The Everblades were 2-for-5 on the man-advantage and held SC to a 0-for-3 mark on the power play.

South Carolina returns home next week for a 3-game series against the Fort Wayne Komets at the North Charleston Coliseum beginning Friday night at 7:05 p.m.