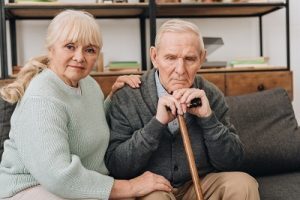 There are all kinds of crimes that people commit, but if someone preys on an infirm individual, that’s particularly heinous. You would hope that if you live your life and grow to old age, that those around you will treat you respectfully. You’d also expect that they’d do the same to your relatives.

Unfortunately, elder abuse does occur, and more often than people would like to consider. In this article, we’ll talk about what elder abuse is, why it’s so awful, and what you can do to prevent it.

What Precisely Does Elder Abuse Entail?

If you’ve never heard the expression “elder abuse” before, it refers to when someone is abusive toward an older individual. Specifically, the law considers it elder abuse when someone abuses an individual who’s age 60 or older.

Elder abuse can be physical. Someone might punch, kick, scratch, pinch, choke, or otherwise physically harm an older person. It can be psychological if someone berates an older person, withholds privileges from them, threatens them with harm, takes away their medication, or doesn’t allow them to participate in activities.

It can be sexual sometimes. The person perpetrating the abuse can touch the older individual inappropriately. They can force them to perform sexual acts. Rape is perhaps one of the worst elder abuse situations, but it does happen as well, particularly with individuals the perpetrator identifies as being unlikely or unable to report it.

Neglect is an elder abuse form. The caretaker might not allow the individual to bathe or clothe themselves. They might take away their food or beverages. They may remove their blankets at night.

There’s even financial elder abuse. If that’s occurring, the perp might steal the older person’s money, use their credit cards without permission, pawn or sell their jewelry and other valuables, and so forth.

What’s So Bad About This Abuse Form?

It should be self-evident why this abuse form is wrong, but it’s worth saying that anyone who would do this to an older person who cannot defend themselves is especially cowardly and cruel. Bullies often try to select targets who they feel cannot protect themselves, and no one would argue that elder abuse is bullying in its most flagrant and malicious form.

With elder abuse cases, you might have a relative, nursing home worker, janitor, bus driver, or someone else who works with a single older person, or sometimes many of them. This person might be opportunistic, seeing a chance to steal from a helpless person or take advantage of them in some other way.

What’s even worse is if you have someone who actively seeks out a job where they are working with older people because they know going into the experience that they want to abuse them. Often, with these individuals, you will find that there’s a behavior pattern. They might have been abusing elderly individuals for years and getting away with it.

What Can You Do to Prevent It?

There’s quite a bit that you can potentially do to prevent elder abuse. The first thing that you might do is allow your older relatives to live with you if you find that they can no longer function independently. If you’re there to take care of an enfeebled relative rather than putting them in a nearby nursing home or an assisted living facility, that makes elder abuse an impossibility.

However, some people are not able to do that for various reasons. You might not have enough room, or perhaps your older relative would prefer a nursing home instead of staying with your family. They may have some disease or disorder that you can’t handle because no one trained you in how to do so.

If that’s the case, you need to do some careful research to determine what nursing homes or assisted living facilities have the best reputation. You want to find one that has glowing reviews, and you and your older relative should visit it and tour the place before you leave them there. You can also speak to some of the residents to ascertain what they think of their day-to-day life and the conditions.

What Else Can You Do?

Aside from that, you can visit your relative frequently and stay in touch with them. When you see them, ask them how they’re doing. Watch to see if they are evasive or they seem down or depressed in any way.

If you can’t see them that often, talk to them on the phone. Exchange text messages with them or have frequent Facetime calls. Ensure that they know they are still a big part of your life and that you have not forgotten them.

When you visit, look for marks on their bodies as well. Make sure that they seem well-fed and that they’re getting their medications. Talk to the staff and try to judge whether any of them strike you as cruel or inattentive.

What if You Detect Elder Abuse?

If you do suspect elder abuse, ask your relative about it. If they don’t have the capacity to answer you, you might try setting up a hidden camera in their room to see if you can catch the perpetrator in the act.

If you think that elder abuse is happening, then remove your relative from that facility. Also, post online in forums about what happened. Even if you cannot come up with enough physical evidence to get the cops to charge anyone, you should let the world know about what you suspect took place.

Elder abuse is an ongoing problem, and it’s when you stop paying attention to your relatives that it can happen most easily. Make sure to watch out for your family members since you’d certainly hope someone will do the same thing for you when the time comes.

Make Every Day Count: 5 Plants That You Can Grow Indoors