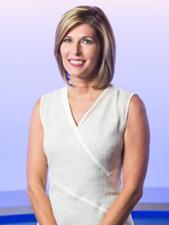 Following on the heels of her two New York Times best selling books ‘Stonewalled‘ (2015) and ‘The Smear’ (2018), veteran CBS news woman Sharyl Attkisson delivers ‘Slanted‘, a scathing and eye opening account of just how bias the mainstream media has become over the past several decades. In the more than 290 pages she declares her bosses oftentimes preferred watered down fiction to actual fact.

Leaping from local affiliates in the mid 1980’s to a short stay at CNN, Attkisson eventually spent more than 20 years working her way up through the ranks with CBS News, becoming a much revered investigative reporter. After being slighted by the network on several occasions she opted out of her contract in 2014, although the powers that be gave her opposition.

Attkisson re-emerged in 2015 as the host of ‘Full Measure’ a half hour investigative news show airing Sunday mornings on Sinclair Broadcasting Group channels coast to coast. The new format allows her to cover stories once deemed ‘untouchable’, covering everything from politics and Supreme Court issues to groundbreaking current events.

In ‘Slanted : How The News Media Taught Us To Love Censorship and Hate Journalism’, Attkisson provides first hand accounts how she was subjected to media bias, and how if her work didn’t fit the corporate ‘narrative’ it would more often be denied by CBS bigwigs, rather than be aired on national television. She even recalls times she was attacked for offering up actual fact based information online. 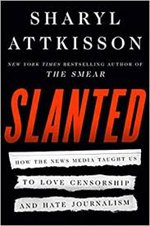 From the very beginning Attkisson asserts that the puppeteers at major television news networks care only to reject intellect and reason. In layman’s terms, those who pull the strings in the news room and board room think they are smarter than you.

They (CEO’s & senior producers) are often in bed with corporate America and Big Government, with spinning the narrative their overall agenda. They assume the viewers are stupid, and by playing a fact versus fiction substitution game, they further assume no one will get hurt by the myriad of lies or misinformation being offered up.

Attkisson does not shy away from her disdain for the mainstream media and their skewed takes on how they present information in the modern era. She easily draws comparisons to George Orwell’s fictional 1948 classic dystopian novel ‘1984’, to the current ‘Big Brother’ social media driven concept leading to totalitarianism, aka systemic political control.

No stone is left unturned in ‘Slanted’. Attkisson declares Washington DC and the mainstream media have been working together to protect drug manufacturers, big tech companies, and more importantly how the two entities working in tandem, have covered up many issues they felt the public did not need to know, no matter how potentially damaging they were.

Among the untold stories she reported on, but never made it on the air include discrepancies in congressional spending, i.e, funds allotted for projects by either democrats or republicans that are or were a clear abuse of taxpayer money. Others stories include school lunch fraud, the swine flu epidemic, and so called reputable charities that were less than charitable.

Attkisson makes mention of politicians, some who have been given a pass by the media while others vehemently scrutinized, adding former president Donald Trump was a prime target by the mainstream media from the very day he announced his candidacy. Prior to his term as POTUS, Trump was considered an entertainment and business insider. However when he ran as a republican promoting conservative issues, he quickly became bait for the liberal media sharks.

While many of Attkisson’s contemporaries in the media are still handcuffed to their bosses and the networks, Attkisson is not afraid to speak out on the injustices taking place in the industry. She asserts that the strong arm of censorship has shifted from the government to mainstream and social media, a claim she asserts is perhaps even more deadly than the original sin.

With 35 years on camera, Attkisson recalls earlier days including her time at CNN when the media was neutral, neither bias or prejudice. She remembers when CNN reported the news fairly, before they became a liberal democrat loving opinion network driven by ratings and panelists. She provides the same can be said for Fox News, using a similar format to promote conservative agendas.

In her book (page 188), Attkisson refers to a comment renowned liberal billionaire and CNN founder Ted Turner made in 2018 regarding his former empire, ‘I think they’re stickin’ with politics a little too much’. Even the liberal ‘mouth of the south’ recognized mainstream media had developed prejudiced tunnel vision.

Attkisson allows there are still many like her who believe in presenting fact driven news, but often their voices are silenced. On the flip side of the media coin are those just entering the field, who are too young and hungry to buck the system, following their leaders narratives for the sake of steady employment and advancing their careers.

In closing Attkisson offers up a list of media mistakes, errors she’s noted over the years made by print and televised news outlets. Many of the mistakes involved politics and politicians. She says the Washington Post and CNN kept daily records of Trump’s so called errors, to the point of obsessiveness.

However flagrant lies by the media were left alone. None of the outright blunders and complete falsehoods the media reported were ever retracted, nor do they offer up any apologies for their miscues. Basically Attkisson’s take in ‘Slanted’ is, many in the news media (print & airwaves) are tainted and could care less to fix the issue.

Attkisson simply declares that the mainstream media is biased and above reproach. They create their own narrative, spin their own stories, for no other reason than they can, perhaps for control, power, and financial gain. It is outrageous and ongoing.

‘Slanted : How the News Media Taught Us To Love Censorship & Hate Journalism’ is an in-depth look behind the scenes from a woman who had direct access behind the scenes. Have viewers become brainwashed and developed a distaste for true journalism. If you feed on nothing but mainstream and social media forums, Attkisson suggests you might be dining on ‘fake news’.

If you’re concerned about where America is heading than ‘Slanted’ is a must read. For more on Sharyl Attkisson and her passion to keep fair and honest journalism alive visit her site at https://sharylattkisson.com/

‘The Women Of The Bible Speak’ Offers Up Inspiration

Greg Gutfeld Offers Up Non Self-Help In ‘The Plus’