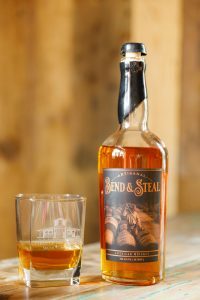 Firefly Distillery on Monday announced the release of a new artisanal spirit, Bend & Steal American Whiskey. The distillery says this new product is a tribute to the art of distilling, aging, and perfecting whiskey and will be exclusively available at Firefly’s Park Circle location (4201 Spruill Avenue in North Charleston).
Bend & Steal gets its name from the process of “stealing” bits from the best barrels in the country and “bending” them with Firefly barrels to create a “perfectly-balanced whiskey.” Made for sipping on the rocks or mixed in a favorite cocktail recipe, Bend & Steal is the latest addition to Firefly’s growing list of bourbons and whiskeys.
The Distillery recently released a limited edition Single Barrel Bourbon which sold out in just three hours. This new whiskey will be available ongoing in addition to its 25+ spirits line of vodkas, moonshines, and distillery specialties including Distillery Expressions Bourbon, Whiskey Jam Whiskey and Sweet Tea Whiskey.
According to Fireflly, the Bend & Steal American Whiskey “features a soft nose with hints of burnt oak, butter and wheat with a lingering fig finish to round out the palate.”
“We have been blending whiskies over the past decade, and this Bend & Steal is the best we’ve made,” Head Distiller and General Manager Jay Macmurphy said. “It’s reminiscent of a complex red wine while being very well-rounded, so I am very proud of this bottle.”

Available for purchase at the Spruill Avenue distillery, the new Bend & Steal American Whiskey will be added into the tasting experience as part of the distillery tour (available Monday through Saturday from 12 pm to 6 pm).

For more information about the distillery, Firefly Spirits, and tours and tastings, visit www.fireflydistillery.com.

Follow us
Related Topics:Bend & Steal American Whiskeyfireflyfirefly distillery
Up Next