Third period goals from forwards Matthew Weis and Justin Florek put the South Carolina Stingrays (12-9-6-2) within striking distance of completing a comeback, but the team was unable to find an equalizer late in the game and suffered a 4-2 loss to the Jacksonville Icemen (11-12-1-2) on Pink In The Rink Night Saturday at the North Charleston Coliseum.

Jacksonville goaltender Kyle Keyser turned aside 25 shots to earn the win for the Icemen, while his counterpart Hunter Shepard finished with 23 saves for SC in a losing effort.

The Icemen opened the scoring for the third straight game and led 2-0 after the first 20 minutes after goals by Mike Szmatula at 5:55 and Derek Lodermeier at 18:33.

Brendan Warren extended the Jacksonville lead to 3-0 with the only goal of the middle frame at 15:34. 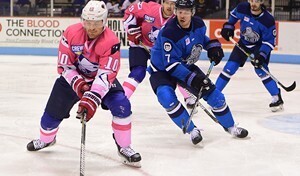 South Carolina got their comeback attempt started at 13:50 of the third when Weis beat Keyser for his third goal of the year to cut the Icemen lead to 3-1. Assists on the tally went to forward Cole Ully and defender Jordan Klimek.

Just 1:04 later, the Rays made it 3-2 on a goal by Florek at 14:54. Initially a shot by Andrew Cherniwchan, the puck glanced off Florek and past Keyser to make it a one-goal game. A second assist on the play was given to defender Max Gottlieb.

With the momentum on South Carolina’s side, the Icemen took back-to-back minor penalties with less than four minutes remaining to give the Stingrays a 5-on-3 man-advantage, but SC was unable to capitalize on the chance. After the first penalty expired, the Rays pulled goaltender Hunter Shepard in favor of an extra attacker but were once again unsuccessful at tying the game.

With 1:10 to go in the contest, Szmatula got the puck out to the neutral zone and backhanded it the length of the ice into the empty net to seal the win for Jacksonville.

Both teams were unsuccessful on the power play, with the Rays holding Jacksonville to an 0-for-2 mark while ending at 0-for-5 themselves.

South Carolina is back in action on the road next week beginning in Orlando on Tuesday night at Hertz Arena at 7 p.m.

Cougars Come Up Short Despite Last-Second Half Rally

Cougars Bounce Back With 1-0 Over No. 23 Alabama