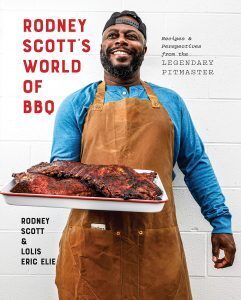 The 224-page book, co-written by award-winning writer Lolis Eric Elie, relates Rodney’s poignant, uplifting story of how hope, hard work, and optimism helped him change the course of his life. He also shares stories of South Carolina foodways and rich traditions, and provides mouthwatering barbecue recipes that can easily be made at home.

Rodney Scott’s World of BBQ details a lonely, solitary childhood in the small Southern town of Hemingway, SC. Raised in a home where “… work was the family philosophy,” little to no accommodation was made for his youth: he smoked his first whole hog by himself at age 11, picked tobacco, and since schoolwork was considered secondary to “real work,” he missed out on almost all the usual joys of childhood. Yet, without bitterness, and despite not having the advantages that money or a great education can confer, Rodney writes, “… I told myself that one day I wanted the world to see me and hear me. Much later, I realized I could do that through food….It feels good now to be living in a reality that’s bigger than my old dreams.”

And he learned to dream big: after numerous sacrifices, setbacks and family heartbreak, Rodney made the tough decision to venture out on his own, and now co-owns two critically-acclaimed locations of Rodney Scott’s Whole Hog BBQ in Birmingham and Charleston, with a third to follow in 2021. In 2018, he received a James Beard Award as “Best Chef: Southeast,” and in 2020, Netflix chronicled his story in their “Chef’s Table” series.

Yet despite all his success, Rodney remains unchanged – for him, barbecue is still a universal language of food that he uses to communicate with people all over the world, and, crucially, “every day is a good day.”

The book is photographed by Jerrelle Guy with 50+ recipes, and even provides detailed instructions and images on how to construct a BBQ pit. The recipes can all be made on a conventional grill and include: