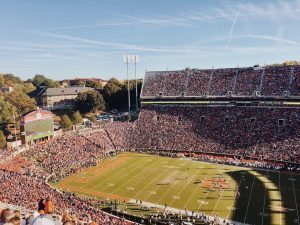 When it comes to sports in Savannah, some may think of the Enmarket Hockey Classic, while others may remember their first Enmarket Savannah Bridge Run. Even more might point to the seemingly unending golf courses, ideal for amateurs and pros alike.

For the average American sports fan, it may be surprising that a city like Savannah shares its major league teams with North Carolina cities like Raleigh and Charlotte. With the Panthers still hungry for a Super Bowl title and the Hurricanes with only one Stanley Cup to their name, it’s actually the Clemson Tigers that represent the highest tier of sports competition in SC.

Though the Tigers may be an NCAA football program, they’re the crowning jewel of the Carolinas—and, some would argue, college football as a whole. Sports pundits study head coach Dabo Swinney just as thoroughly as they do the roster of incoming recruits and outgoing NFL hopefuls.

The school’s top QB, Trevor Lawrence, is slated to enter the 2021 NFL Draft as one of the most hyped rookies and is already the subject of analysts who offer bets on NFL  and NCAA games. After leading Clemson to two undefeated seasons, Lawrence represents the best of the Tigers program. But with Lawrence set to graduate to the major leagues, Swinney will be faced with finding the next reliable quarterback.

Given his storied history with Clemson, it seems likely the head coach will find a way to prevail.

In 2008, Swinney replaced Tommy Bowden as head coach in what was thought would be an interim placement. However, Swinney, after boosting their winning record before the end of the 2008 season, Clemson signed the coach to a five-year contract.

But to build a national championship-winning team, Swinney needed more than the confidence of the Clemson football program: money. The only catch? In order to attract more sponsors and students, Clemson desperately needed a winning football team.

Over the years, Swinney made do by recruiting better players than his competitors. By 2014, Clemson’s football program had wildly surpassed its 2008 condition. However, Swinney continued to face financial obstacles while trying to improve training facilities and other infrastructural amenities.

With Swinney in a tight position, newly-appointed athletic director for Clemson, Dan Radakovich, suggested he go straight to the school’s most generous donor: Leon J. Hendrix Junior, or Bill, for short. With the promise of bringing Bill multiple national championships, Swinney was able to goad a major donation that would see new facilities on Clemson’s campus in northwest South Carolina.

By the next season, Clemson would be competing in the 2015 NCAA Championship Final. Though they’d lose to Alabama, their 2015 season is considered one of the Tigers’ best on record. 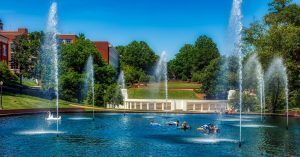 To date, Clemson has taken home three national championship titles, in 1981, 2016, and 2018. The squad has also competed in two national championship finals games, in 2015 and 2019. Though the Tigers are now one of the most feared teams in the NCAA FBS, the implications of Swinney’s dedication and vision have had much grander effects on the school and region.

Nestled in rural SC, the city of Clemson has a reinvigorated sense of identity that’s closely tied to the Tigers—and not only their football team. With Swinney’s national titles, the school began attracting more students and higher-caliber athletes, which has, in turn, led to more sponsorships and donations for the school.

Not only does an influx of revenue help Clemson keep their athletic department running smoothly and at a competitive level, but the school’s academics have also benefitted. While massive schools like Ohio State or Michigan State have well-rounded academic and athletic departments, Clemson has had to revitalize multiple departments to keep up with its recent rise in notoriety.

Now, Clemson is rated as a ‘more selective’ school in terms of their academics, meaning they have more options when it comes to offering admissions to non-student-athletes. In 2021, the US News & World Report ranked Clemson 29th in terms of the top public universities in the US of 1,626 eligible schools.

The Science Behind Lucky Charms