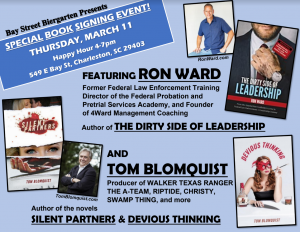 On Thursday, March 11th, from 4 pm to 7 pm, the Bay Street Biergarten will host a joint book signing with Ron Ward and Tom Blomquist.

Ward, the former Federal Law Enforcement Training Director of the U.S. Probation Academy, a former US Karate Team Member, and Founder of 4Ward Operations (Leadership Coaching), will be signing copies of his new book, The Dirty Side of Leadership. Alongside Ward will be Tom Blomquist, an award-winning television writer, director and producer for network shows such as Walker Texas Ranger, The A-Team, Riptide, and Catherine Marshall’s Christy, who is celebrating the release of his new book, Devious Thinking.

ABOUT THE DIRTY SIDE OF LEADERSHIP

Most leadership books and training programs gloss over the more personal aspects of management. This book is different.

In this book, Ron shares the many twists and turns of growing up in the Appalachian Coal Fields and then progresses through a 30+ year career in local and federal law enforcement, directing a successful national training academy, and becoming Chair of The Federal Law Enforcement Training Accreditation Board. Each story provides a takeaway, strategy, or mindset suggestion that can be applied immediately in your day-to-day business relationships. This book is for anyone who aspires to be a truly great leader, by someone who endeavors to help you master the Dirty Side of Leadership.

ABOUT THE REVENGE COMEDY, DEVIOUS THINKING: Misadventures In Getting Even

Rome may be the place where people travel for romance, but American beauties Monty Harrison and Dana Zimmer learn that it’s a miserable place to have your heart broken. With little in common beyond their crushed spirits, they hatch a plan to get revenge on their exes by using the intimate information that only former lovers would know.

Ron Ward is an author, speaker and founder and CEO of 4ward Operations (Leadership Coaching). He previously served as Safety and Training Division Chief and Academy Director of the Federal Probation and Pretrial Services Academy at the Federal Law Enforcement Training Center (FLETC) in Charleston, South Carolina. In addition to these responsibilities, from 2102 to 2018, Ron oversaw the US Probation and Pretrial National Wellness Committee and is certified in Crisis Incident Stress Management. As Academy Director, Ron was responsible for training all newly hired U.S. Probation and Pretrial Services Officers, and the certification and recertification of the agency’s firearms, safety, and search team instructors. Ron previously served as Chair of the Federal Law Enforcement Training Accreditation Board of Directors (FLETA) from August 2012 through September 2014. Ron began his law enforcement career as a deputy sheriff and later became a state probation and parole officer and, finally, a U.S. Probation Officer, where he served for 14 years. Prior to being named Academy Director, Ron was a section chief and taught defensive tactics, firearms, non-lethal force applications, and several classroom courses at the academy. Ron is a former USA/AAU East Coast Karate Silver Medalist and qualified for the US Karate Team.

Ron holds a Bachelor of Arts degree in Education from Emory and Henry College, Emory, Virginia, and a Master of Science Degree in Criminal Justice Administration from Mountain State University, Beckley, West Virginia

Tom Blomquist is an award-winning screenwriter, producer, and director who has been associated with some of the nation’s most popular television dramas, including CATHERINE MARSHALL’S CHRISTY, WALKER TEXAS RANGER, THE A-TEAM, HUNTER, RIPTIDE, SWAMP THING, FARSCAPE, WEREWOLF, IN A HEARTBEAT, FAME LA, and HARDCASTLE & MCCORMICK, among others. He was also Staff Producer on NBC’s classic late-night talk show TOMORROW WITH TOM SNYDER and served as Creative Executive on the Emmy-Winning HALLMARK HALL OF FAME specials. Other projects have included directing music videos for ACM Best New Female Artist of the Year Kellie Coffey and a feature length documentary about her career, KELLIE COFFEY: I’M STILL HERE.

In addition to his work in television and two novels, Blomquist has published a textbook EYE OF THE STORM: DIRECTING FOR FILM, TELEVISION & EMERGING MEDIA, which is recommended reading in the Disney/ABC DGA Directing Program.

Tom Blomquist is also an educator. Having taught screenwriting at the American Film Institute Conservatory, University of Southern California, Chapman University, and the UCLA Writers Program, he was eventually awarded the title of Professor Emeritus of Film and Television Production by California State University, Long Beach. He has additionally been named Visiting Artist by the University of Applied Sciences in Hamburg Germany.