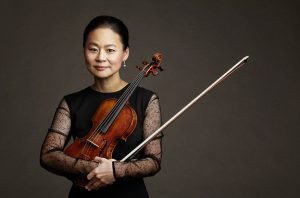 Through the generosity of Midori’s Nonprofit Organization “Partners in Performance,” Chamber Music Charleston (CMC) is pleased to offer a series of virtual events developed specifically for audiences in Charleston. While these events do not replace Midori’s future in-person recital, which was postponed due to COVID-19, it will provide the opportunity to get to know Midori better – and for her to get to know our Charleston community.

The series of events begins on Saturday, March 13th at noon with a virtual masterclass. Local violin students Emma Joyce, Elaina Gable, and Jennifer Lee will work with Midori on masterworks from the violin repertoire. Through the magic of virtual technology, Midori will join the master class via Zoom while the participating students are streamed live from the historic Charleston Library Society, 164 King Street, Downtown Charleston.

On the same day (March 13th) at 3 pm, Midori will host an Advocacy and Inclusion Workshop, discussing how to expand inclusivity in classical music and advocacy based on her past and current projects bringing music to underrepresented populations. This discussion will be for a small invitation-only audience, with the goal of having an open conversation among all of the participants.

Sunday, March 14th at 3 pm will have a Talking Program Notes presentation. The 45-minute event will feature Midori discussing her upcoming virtual recital, including a question and answer session.

The events conclude on Tuesday, March 23rd at 7 pm with a virtual recital. Midori will be joined by pianist Leva Jokubaviciute for a program of music including Grieg’s Violin Sonata No. 2 and Franck’s Violin Sonata in A Major.

Midori is a visionary artist, activist and educator who explores and builds connections between music and the human experience and breaks with traditional boundaries which makes her one of the most outstanding violinists of our time.

Midori’s latest recording with the Festival Strings Lucerne of Beethoven’s Violin Concerto and two Romances was released in October 2020 by Warner Classics. Her diverse discography by Sony Cassical, Ondine and Onyx includes recordings of Bloch, Janáček and Shostakovich and a Grammy Award-winning recording of Hindemith’s Violin Concerto with Christoph Eschenbach conducting the NDR Symphony Orchestra as well as Bach’s Sonatas and Partitas for Solo Violin filmed at Köthen Castle, which was recorded also for DVD (Accentus).

Midori is deeply committed to furthering humanitarian and educational goals. She has founded and manages several non-profit organizations, including Midori & Friends, which provides music programs for New York City youth and communities, and MUSIC SHARING, a Japan-based foundation that brings both western classical and Japanese music traditions into young lives by presenting programs in schools, institutions, and hospitals. In recognition of such commitments, she serves as a United Nations Messenger of Peace.

Midori was born in Osaka in 1971 and began her violin studies with her mother, Setsu Goto at an early age. In 1982, conductor Zubin Mehta invited the then 11-year-old Midori to perform with the New York Philharmonic in the orchestra’s annual New Year’s Eve concert, where the foundation was laid for her following career.

Midori plays the 1734 Guarnerius del Gesù ‘ex-Huberman’. She uses four bows – two by Dominique Peccatte, one by François Peccatte and one by Paul Siefried.

Follow us
Related Topics:Chamber Music CharlestonMidoriPartners in Performance
Up Next

Around the Bend Returns for Spring 2021 Season