ESTERO, Fla. – The third time was the charm for the South Carolina Stingrays (10-8-6-2) Saturday night. After losing back-to-back shootouts earlier in the week, Max Novak scored in the third round of the skill session to secure a victory over the Florida Everblades (21-5-0-2) by a 4-3 score at Hertz Arena.

Forward Cole Ully found the back of the net twice for the second straight night in the SC win and both tallies came with primary assists by Novak, who was named the game’s first star. Goaltender Alex Dubeau claimed the win with 27 saves and stopped all three chances he saw in the shootout.

The Rays have now secured points in five straight games and claimed a total of four points in the three contests in Estero this week. 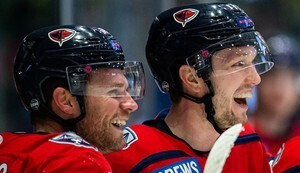 Defender Jordan Klimek got the scoring started for South Carolina when he netted his second of the season on a rebound in front of the Florida goal off an initial shot by forward Cam Askew. The tally, which came at 9:21 of the first, also had an assist from defender Cole Fraser.

The Everblades evened the game at 1-1 when Joe Pendenza scored his seventh of the year at 15:46 of the opening frame.

But before the close of the stanza, Novak found Ully for his first of the night and 10th of the season and SC was back in front 2-1 after the first 20 minutes.

Ully added on to the lead in the second, scoring his 11th of the year from Novak and forward Dan DeSalvo at 17:39 of the middle period to extend the Rays’ advantage to 3-1.

Florida wasn’t done, however, scoring twice in the final period to force overtime for the third consecutive game between the two rivals. Brad McClure struck at 1:59 of the third to bring the Blades within a goal and John McCarron tied things up at 3-3 at 13:20.

In the extra session, SC outshot Florida 7-4, but neither team was able to break the deadlock.

Both goaltenders made saves in the first round of the shootout, and DeSalvo came inches from putting South Carolina in front when his shot hit the right post in round two. But after Dubeau turned aside a chance from Alex Kile in the third round, Novak cashed in to win it for the Rays.

Goaltender Jake Hildebrand suffered the loss for Florida, making 37 saves in defeat. The Stingrays outshot the Everblades 41-30 in the game, which saw both teams come up empty on special teams with the Blades finishing 0-for-3 on the man-advantage and SC ending at 0-for-2.

South Carolina returns home next week for a 3-game set with the Jacksonville Icemen at the North Charleston Coliseum beginning Wednesday night at 7:05 p.m.