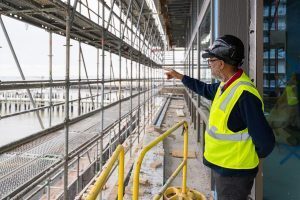 Bernard Powers looks out over the former site of Gadsden’s Wharf, a major entry point for the transatlantic slave trade. (Photos by Mike Ledford)

Bernard Powers knows he is not very good when it comes to retirement. After working 26 years as a history professor at the College of Charleston, Powers is having a little bit of a problem finally taking it easy.

“My former colleagues have told me that I get an F in retirement,” he says with a chuckle.

Since his retirement in 2018, Powers has actually added a few more titles to his name. In the last couple of years, he has been named the interim CEO of the International African American Museum, the director of the College of Charleston’s Center for the Study of Slavery in Charleston, and he is the lead academic liaison for the College’s work with the Universities Studying Slavery consortium.

Powers gave an update on several projects during a recent tour of the soon-to-be-completed International African American Museum in downtown Charleston. The museum is being built adjacent to the Charleston harbor on a location formerly known as Gadsden’s Wharf.  That site was once the major entry point for the transatlantic slave trade, where almost half of enslaved Africans first set foot in North America. Seated in a chair in front of a glass wall that overlooks the Charleston Harbor, Powers provided updates on several of these projects.

The Universities Studying Slavery consortium is a collaborative with about 50 colleges and universities across the country exploring the enslaved past in institutional histories. The College joined the consortium in 2018.

“We joined that consortium because we knew that those other universities could help us begin to understand and unravel the story of slavery’s relationship to us at the College of Charleston,” says Powers.

Since joining, Powers says several scholars have expanded grassroots research efforts to help uncover the linkage to enslaved people and the way that they were used to construct the College of Charleston.

The Center for the Study of Slavery in Charleston

Even though it has been in operation for more than two years, Powers says the center is still a work in process. He praises the cadre of faculty members working to advance the mission of the center, and says one of the things they are doing now is trying to introduce some of their research into the public arena. Powers says one way to do that is to eventually establish a series of both physical and virtual tours of Charleston.

Powers also wants to develop an annual speaker series that will bring world-renowned scholars to the Lowcountry to address various topics and research. And he envisions the center creating an academic training program that will provide professional development opportunities for public and private school teachers with the goal of helping educators in the teaching of slavery and subjects related to race and history.

Along with the education component, Powers say members of the center are also researching ways to remediate and eventually eliminate social disabilities that are the inheritance of the institution of slavery. He says this includes addressing health, education, economic and other disparities based on race.

Powers reminisces about how the concept of the International African American Museum first started to take shape. He recalls being gathered around a large conference table with then-Charleston mayor Joe Riley, community representatives, historic preservation experts and others to map out a plan to turn the idea of an African American museum into reality.

“That was a meeting in which we put a lot of things down on paper,” he says. “It has taken a lot of effort, sacrifice and a commitment by a lot of people to bring us to this point.”

Since breaking ground in October 2019, the museum has slowly started to take shape along the banks of the Cooper River and Powers has been working with the transformation every step of the way. Despite the pandemic, construction of the International African American Museum is on schedule and is still expected to open next year.

When it opens to the public, the museum will not only have exhibits featuring historic figures, events and experiences ranging from slavery to the civil rights era and the ongoing freedom struggles, but it will also house the Center for Family History, a section of the museum that will allow visitors to trace their genealogy.

“We hope that the visitors who come to this place will have a far greater appreciation of the contributions that African Americans have made to the country and, indeed, the entire world,” says Powers. “But more specifically, we hope that they will have a greater appreciation of how Black lives and other lives have been intertwined in the making of the history of this country and the world.”

Follow us
Related Topics:black history monthcollege of charlestonDr. Bernard Powers Jr
Up Next