ESTERO, Fla. – For the second straight game, the South Carolina Stingrays (9-8-6-1) mounted a third period comeback only to come up short in extra time, falling in a shootout by a 4-3 score to the Florida Everblades (20-5-0-1) at Hertz Arena on Wednesday night.

Forwards Tim Harrison, Dylan Steman and Dan DeSalvo each found the back of the net for South Carolina, while defender Blake Hillman picked up two assists and goaltender Sean Bonar turned aside 31 shots in a losing effort. 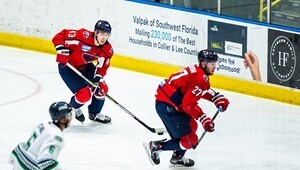 Florida opened the scoring at 11:20 of the first period when Levko Koper capitalized on a 2-on-1 rush to make it 1-0.

The Rays evened the score up at 1-1 after a successful penalty kill at 6:34 of the second when Harrison struck for his second goal of the year at 6:34. The attacker came down the left wing and beat goaltender Jake Hildebrand with a wrist shot over the glove to knot up the game and Hillman earned the lone assist on the tally.

However, South Carolina fell behind later in the frame when they allowed back-to-back shorthanded goals to Joe Pendenza at 14:25 and Arvin Atwal at 19:15 and went into the third trailing by a score of 3-1.

Just like he did on Saturday, Steman started the comeback for the Stingrays in the third period, scoring on a rebound in front of the Florida net at 5:46 for his seventh goal of the season to cut the Blades’ lead down to 3-2. Assists on the strike went to Hillman and defender Connor Moore.

Later in the frame, SC tied the game at 3-3 with a shorthanded goal of their own when DeSalvo capitalized on a turnover during a penalty kill and moved in on a breakaway, beat Hildebrand for his seventh of the year at 9:52.

Despite multiple chances for both teams late in regulation, neither side was able to find the back of the net and the game headed for overtime. In the extra session the Rays were unable to capitalize on two separate man-advantage chances while Florida was held silent on a power play opportunity of their own and the game continued into a shootout.

The Everblades scored twice during the skill session with Brad McClure and Alex Kile beating Bonar, while South Carolina was unable to solve Hildebrand.

Florida’s netminder stopped 32 shots in victory as the teams finished even with 35 shots on goal apiece during the contest. Both clubs also came up empty on the power play in the game, with Florida finishing 0-for-3 while SC ended at 0-for-5.

The Stingrays and Everblades continue their series in Estero on Friday night at 7:30 p.m.