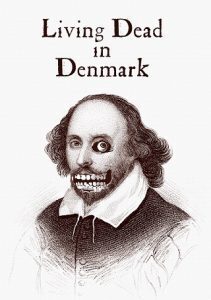 The College of Charleston’s Department of Theatre and Dance will stage “Living Dead in Denmark” by Vietnamese-American playwright, television writer, and screenwriter Qui Nguyen.

Known for his innovative use of pop-culture, stage violence, puppetry, and multimedia (as seen is the College’s 2014 production of Nguyen’s “She Kills Monsters”), the innovative playwright combines some of these elements into this action-adventure/horror sequel to William Shakespeare’s “Hamlet.” The undead have risen to power and are trying to take over the world, led by the zombie lord and true king of Denmark. Fortinbras, assembling a formidable opposition, has resurrected the corpses of some of the greatest women that Shakespeare had to offer: Lady Macbeth, Juliet, and the very angry Ophelia. A clash of the undead titans ensues!

The “Living Dead in Denmark” livestream will take place at 7:30 pm on Friday, March 12th and Saturday, March 13th, 2021. The production contains material recommended for mature audiences. Admission prices are $25 (groups of 3 or more), $15 (adults), $12 (seniors, military and 18 and under), $8 (College of Charleston faculty, staff and students). Tickets can be purchased online at go.cofc.edu/livingdead. Captioning will be available for both performances, and cast/crew talkbacks will follow each show, with an American Sign Language interpreter at the March 13th talkback. For more information, email cofcstages@cofc.edu or call (843) 953-6306.

“Living Dead in Denmark” premiered in 2006 at Vampire Cowboys Theatre (NYC), which was cofounded by Nguyen and is the first professional theatre organization officially sponsored by NY Comic Con. The New York Innovative Theatre Awards honored the play with Best Choreography/Movement and nominated it for Best Production of a Play, Best Original Score, Best Costume Design, and Best Sound Design.

A native of Spartanburg, Henderson began working at Trustus Theatre in 2007 as Marketing Director. He directed professionally for eight years before being named Trustus Theatre’s third Artistic Director in 2015 and appointed the Producing Artistic Director in 2020. Henderson was honored by the S.C. Theatre Association with the 2019 Founders Award in recognition for his contributions to the state’s theatre community. The Charleston community and visiting theatergoers may have seen Henderson’s direction of PURE Theatre’s “Fun Home”production that appeared in its 2018 season and during Piccolo Spoleto.

The City of Charleston Office of Cultural Affairs Presents “Like A Girl: Dare to Dream” by Fer Caggiano