The South Carolina Stingrays (9-8-4-0) were unable to overcome an early deficit and fell to the Jacksonville Icemen (7-9-1-1) by a score of 5-3 on Sunday afternoon at the North Charleston Coliseum.

Defender Zach Malatesta made a big impact offensively for South Carolina, assisting on two of the team’s goals, while goaltender Jake Kupsky came on in relief and stopped 22 shots as his team attempted a comeback. 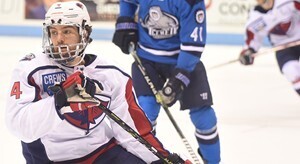 The Icemen scored three times in the first period, forcing a change in goal for South Carolina with Kupsky coming in to replace Sean Bonar. Derek Lodermeier netted the first goal of the afternoon at 1:35 before Ian McKinnon extended the advantage at 8:23 and Cameron Critchlow made it 3-0 at 10:59.

During the second, Jacksonville tacked on two more tallies from Erik Bradford at 13:33 and Ara Nazarian at 17:59 and held a 5-0 advantage late in the period.

But in the final minute of the frame, Darien Craighead was able to get SC on the board during a power play opportunity, redirecting a shot by Malatesta past goaltender Kyle Keyser at 19:21. The second assist on the goal went to forward Cam Askew.

The Rays gained momentum in the third, cutting the lead down to two goals in their pursuit of a comeback. At 2:35 of the final period, Dylan Steman was credited with his sixth goal of the season when he tossed a shot toward the net that bounced past Keyser to make it 5-2. Assists on the tally went to defender Blake Hillman and forward Graham Knott.

Then at 11:05, forward Max Novak entered the Jacksonville end on a rush down the right wing and used a wrist shot to put the puck over Keyser’s right pad and make it 5-3. Malatesta and forward Dan DeSalvo were credited with assists on the strike.

Despite a flurry of action around the Icemen net in the final minutes, the Rays were unable to get anything else past Keyser to get any closer on the scoreboard.

South Carolina outshot Jacksonville 39-29 on the afternoon. The Icemen netted three of their goals on the man-advantage, finishing 3-for-7 on the day, while the Stingrays ended at 1-for-8. Keyser totaled 36 saves to earn the win, while Kupsky stopped 22 shots for SC in relief of Bonar who made just two saves.

The Rays and Icemen will meet once again next week for a two-game set in Jacksonville beginning on Friday night at 7 p.m.