Despite an aggressive effort at the start, the South Carolina Stingrays (9-7-4-0) came up short to the Florida Everblades (16-5-0-1) in front of a socially distant sellout crowd on Military Appreciation Night Saturday at the North Charleston Coliseum, falling by a final score of 5-1.

Forward Dan DeSalvo scored the lone goal of the night for South Carolina, netting a power play tally during the second period.

The Rays came out with great energy in front of the loud crowd but were unable to get a puck past goaltender Jake Hildebrand in the opening frame despite outshooting Florida 12-5. 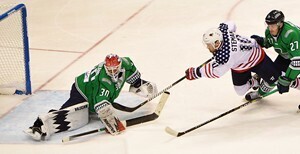 Stefan LeBlanc opened the scoring for the Blades and made it 1-0 at 18:50 of the first.

Early on in the second, DeSalvo got SC back in the contest with a power play goal at 2:24 from Zach Malatesta and Andrew Cherniwchan.

Before the end of the middle frame, Florida’s Levko Koper put his team back on top by a 2-1 score on a setup from LeBlanc at 14:13.

The Everblades scored three unanswered goals in the third, putting distance between themselves and South Carolina. Joe Pendenza made it 3-1 at 14:35, before Alex Kile struck at 15:39 and Koper registered his second tally of the night to close the scoring in the final minute at 19:43.

Each team finished with 12 penalty infractions in the contest, totaling 84 minutes. The Rays went 1-for-6 on the man-advantage, while Florida finished 0-for-7 on the power play. The Everblades outshot South Carolina 31-28 in the contest, with Hildebrand making 27 saves.

Goaltender Jake Kupsky got the start and turned aside 26 shots in a losing effort for the Stingrays.

SC will complete their homestand on Sunday afternoon when they host Jacksonville at the North Charleston Coliseum at 3:05 p.m.