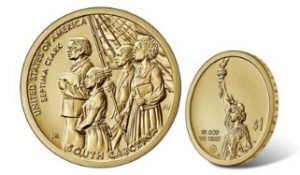 Benedict College alumna and civil rights leader Septima Poinsette Clark is being honored with a collectible coin issued by the United States Mint. The $1 coin depicts Septima Poinsette Clark marching with three Black students carrying books and an American flag. It illustrates education as the pathway to equality and freedom for Black people in America and highlights Clark as an educator and activist leading the way.

“Mrs. Septima Poinsette Clark is one of our most distinguished graduates and is most deserving of this celebrated honor. Clark developed literacy and citizenship workshops that played an important role in the drive for voting and civil rights. Unfortunately, many young people are unaware of the depth and breadth of her contributions. She was widely known as ‘Queen Mother’ to those who knew her.  Dr. Martin Luther King, Jr., commonly referred to her as the ‘The Mother of the Movement,’ said Dr. Roslyn Clark Artis, President, and CEO of Benedict College. In fact, at his request, she accompanied Dr. King to Norway in 1964 when he was presented the Nobel Peace Prize.  She is a trailblazer and a shero because she believed and understood that knowledge could empower marginalized people in ways that the legal equality system in this country could not. She pioneered the link between education and political organizing with the purpose of gaining the right to vote – thus, an equal voice as an American citizen.”

Septima Poinsette Clark graduated from Benedict College on May 26, 1942, with a B.A. degree. Unable to go to college immediately upon finishing high school in 1916, Clark passed the state examination for teaching and began working and an educator on John’s Island. She taught for nearly 20 years before enrolling at Benedict as a part-time student. Determined to earn a college degree, she took some classes in the morning, worked during the day, and returned for evening classes to complete her studies. She is a shining example of the tenacity and resilience that Benedict College students are known for today. Ever the trailblazer, Clark returned to her alma mater to serve as the first female commencement speaker in Benedict College’s history during Dr. Henry Ponder’s tenure as President.

Economic parity was a central component of Clark’s work throughout her life. She fought for equal pay and economic security, and she endured targeted attacks on her own financial well-being. In 1956, four years short of her retirement, Clark lost her teaching position in Charleston, South Carolina for refusing to renounce her membership with the National Association for the Advancement of Colored People (NAACP). The state passed a law forbidding state workers to belong to civil rights organizations.

This injustice fueled her work in teaching Black people how to lead literacy and citizenship workshops in their communities to help people pass voter registration tests. Under her leadership, the Citizenship School Program was established and over 800 citizenship schools were created around the country.  In fact, Rosa Parks was one of her students at the Highlander Folk School in Monteagle, Tennessee. As a result of her efforts, the Southern Christian Leadership Conference (SCLC) headquartered the project and joined forces with the NAACP, the Congress of Racial Equality (CORE), the Urban League, and the Student Non-Violent Coordinating Committee (SNCC) to form the Voter Education Project.

She retired in the early 1970s and was elected to the Charleston, South Carolina School Board in 1975; the same school district that fired her in 1956 for maintaining her membership with the NAACP. A year later, the governor of South Carolina restored the pension that was unjustly taken from her during her teaching years.  Her commitment to civil rights was recognized by President Jimmy Carter in 1979 when he bestowed her with the Living Legacy Award.  She was also awarded the Order of Palmetto, South Carolina’s highest civilian award, in 1982.

“It’s important for people to know her and to appreciate her legacy. The recognition of Mrs. Clark’s life’s work by the U.S. Mint is a tremendous honor. She is the only HBCU graduate honored in the series of coins being produced this year and we are enormously proud to proclaim that she is a Benedict College alumna,” said President Artis.

The Clark coin is part of an ongoing series called the American Innovation $1 Coin Program that pays tribute to pioneering individuals and groups and their accomplishments, from all 50 states, the District of Columbia, and U.S. territories. Four coins are made each year through 2032. The coin can be purchased now in rolls and bags of 25 or 100.  The reverse proof version of the coin is priced at $11.50, with production limited to 50,000.