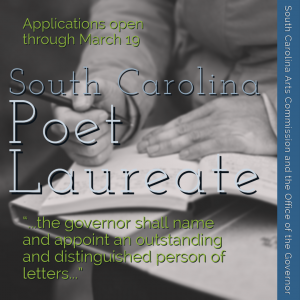 Applications opened Monday, Feb. 8 on the SCAC website. To be eligible for the honorary position, applicants must be 18 or more years old, U.S. citizens, and residents of South Carolina for at least a year among other requirements.

Anyone who wishes to be considered must apply by the deadline.

“South Carolina has a long, storied history of gifted poets and writers,” said Gov. Henry McMaster. “I have no doubt the next poet laureate will continue this tradition of excellence and will serve as an inspiration to our next generation of artists. I look forward to reviewing the candidates and making my selection.”

“The South Carolina Arts Commission is both pleased and honored to be a part of naming the state’s next poet laureate,” said David T. Platts, SCAC executive director. “Words are powerful, with the ability to tear down walls and to build bridges.  The poet laureate’s role as artistic and cultural ambassador, representing both the voice and even the conscience of the state, provides a unique opportunity and platform to inspire and unite all South Carolinians.”

In FY2018, legislation passed by the General Assembly directed the SCAC to recommend poet laureate candidates to the governor. After a panel reviews the applications submitted to the SCAC, it will make recommendations from among those to the governor for consideration. He will then “name and appoint an outstanding and distinguished person of letters as poet laureate for the state of South Carolina” who will serve a four-year term. The named poet laureate will be eligible for one re-appointment.

That person will be the sixth poet laureate since the first was named in 1934. The most recent was Marjory Wentworth of Mount Pleasant, who was appointed by Gov. Mark Sanford in 2003 until she stepped down this past December.

Poetry is enjoying the spotlight after National Youth Poet Laureate Amanda Gorman captured the country’s attention with her high-profile appearances at the inauguration of President Joe Biden last month and the Super Bowl just days ago. She infused those moments with reflective commentary on society and culture using the power of poetry.

“Artistically speaking, there is an immediacy to poetry that can offer insight, hope, and encouragement,” SCAC Program Director for Artist Services Ce Scott-Fitts said.

Follow us
Related Topics:Henry McMasterSouth Carolina Arts Commission
Up Next